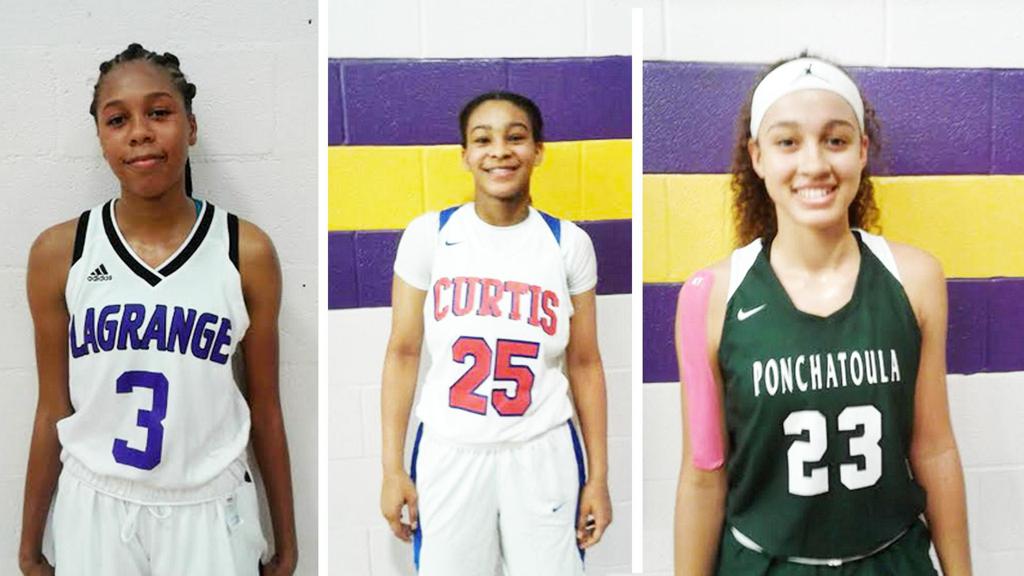 The leaves in much of the country have already changed color with summer warmth giving way to fall jacket weather. Club ball is now dormant (except for pre-high school players) until spring.

Louisiana is one of the earliest to start playing regular season games. Although games at the 7th Annual Troy Giordano Pelican State Extravaganza (held at Denham Springs High School and Junior High in Denham Springs, Louisiana, on October 20) did not count, they did not go lacking in intensity and desire to win. Presented this year by host school Denham Springs High School (close to Baton Rouge), play began at 10am and did not finish until after 9pm. Four gyms were in use with starting times staggered. Between high school and junior college match-ups (not covered here), there was too much for one person to see in one day. Approximately 27 colleges (mostly NCAA Division 1 primarily from Louisiana or surrounding states) attended the event with some schools sending more than one coach (needed due to overlapping times of games).

In watching a team once for a half to maybe the full game, one must not read too much into a pre-season contest. Yet, you can see talent and how organized a team is as to on court function. If you know a team from last year, you might get a feel for whether the team in question is likely to be up or down (at least early in the season) compared to last year.

Your limited observations may help you answer by the following questions. Do they play together? Do they play hard? How athletic are they? Do they play smart? One question you cannot answer is will they collectively get better over the course of the season? Most will but to what extent?

With all above in mind, here were four teams that stood out in watching.

John Curtis Christian High School of River Ridge was a gym consensus pick to be a strong candidate to repeat as best in state or at least come close to it. The team has poise and a confidence in how they play. Yet they are relatively small and still looking like they had not overcome the loss to graduation of one of its top guards. Still they took down a good Ponchatoula team 59-57 in the first (and maybe the best) game of the day.

Ursuline Academy of New Orleans beat an understaffed Walker High School (expected to be strong this year) by just eight points. Ursuline has been the victim of losses of star players (both now graduated) to ACL tears the last two years and now has a new coach. The guards are talented but freshmen and sophomores. What was so impressive was the high-low combination (see players below) and floor spacing.  The team should do well this season but depth could be an issue.

LaGrange High School of Lake Charles won its contest over Mansfield. Its youthful talent (lot of sophomores and juniors) made observers look at this team as one which should be strong over the next two years (good this year and better next).

Ponchatoula High School acquitted itself well in a narrow defeat to John Curtis. The team has several Division 1 prospects of various ages and word in the gym was that the team was missing two helpful role players. This team did well last year and should again this year. They can make shots but if this contest is indicative, they need to work some on cutting down turnovers.

Louisiana – where almost everyone wins a trophy!?

Louisiana's state association (LHSAA) continues to crowns 12 state champions (5 public, 5 select [a confusing designation which includes private, parochial, magnet and some charter schools] plus two micro-sized divisions (also based on enrollment) called "B" & "C where schools have no football.

The word in the gym was that the many of the public schools (none of them recruit?) have a strong dislike for the “selects” who can draw students from much wider territories. What is really confusing is that some charter schools are designated “public” while others are designated “select.” It appears some areas managed to get its charter schools designated “public” which is perceived on average as an easier path to win a state title than “select” which in theory can more easily recruit.

Until the governing body (Louisiana High school Activities Association) can be allowed by its members to come to terms of treating each sport separately rather than just following a football-based model, little is likely to change. A lot of states have separate championship divisions based on public versus private. But with just over 400 schools total, awarding 12 state titles (a combination of six total would probably be enough here) in basketball makes winning one of them be of much less significance than in the majority of states. Obviously, a reduction in number of classes would mean fewer schools celebrating a “state title.” Until pursuit of excellence becomes more important than handing out trophies, not much is likely to change as to the watered-down quality of play in many Louisiana Final Four level contests.

Looking at some of the talent based on limited viewing of any one game...

Below, players are listed alphabetically within graduation year with height, position, and high school with school location in parenthesis.

Orally committed to LSU, Davis was our top performer at the event posting 21 points in one half. She scored via the three, the drive and the mid-range pull-up. She showed an ability to pass successfully in tight quarter-court spaces and in the open court.

Orally committed to Southeast Louisiana, Giaratano makes shots both inside and outside the key, working out of the high post area much of the time. Do not call her not flashy or overly athletic, just productive!

Strongly built and a vocal leader, Hallmon likes to attack the basket. Small but physical, she does not shy away from contact. Orally committed to Louisiana Lafayette. Hallmon is a good distributor on offense and solid defender on D.

Orally committed to Prairie View, Heard plays hard, is physical and has a good motor. Projected as a small forward, she spends a lot of time in the key for her undersized high school team.

Orally committed to Oklahoma State, Jackson is one half of Ursuline’s effective high-low combination. She can finish around the basket but also operate out of the high post with good mobility, passing vision and mid-range stroke.

Committed to Mississippi State, Young repeatedly attacks the basket from the wing. She runs the court well and has terrific ‘ups” at the rim. To her credit, she has overcome several serious knee injuries.

Fairly strong in build as point guards go, Rice is not afraid to post opponents up when not looking to shoot the three-ball. Orally committed to Alabama, she will need to watch her conditioning at the next level.

Chaisson does a lot for her team. A decent but not special athlete, she shoots the three both off the catch and off the bounce. Besides scoring, she does a lot of her team’s ball handling. Division 1 schools should be monitoring her progress.

A quality athlete, Jordan played more on the perimeter than when seen about a year ago. She has developed a baseline to basket game. Getting division 1 offers of strong mid-major programs, she is most adept at finishing on the fast break.

Nelson is strongly built but still moves well. For her size, she has decent handles and is (along with Kennedi Jackson) part of Ursuline’s high-low interchangeable post duo. Perhaps a tad small for many Power 5 schools to consider, she should be getting strong mid-major interest regardless.

Spears continues to be intriguing to Power 5 college. With superior height, good hands and strong build, Spears only runs just adequately but finishes well around the basket. If her teammates would give her the ball more often in scoring position, she would be more productive.

Thompson has a typical “stretch four” body (medium-sold build and runs well). She likes to play on the perimeter but appears more effective scoring when in the key. Getting Division 1 looks, she is also active attacking the glass.

A good athlete with strong build, Warmsley gives a good effort playing with a high motor and embracing physical play. With good handles, she is more than willing to attack the basket. Getting Division 1 looks, she appears to need to improve her shooting range. 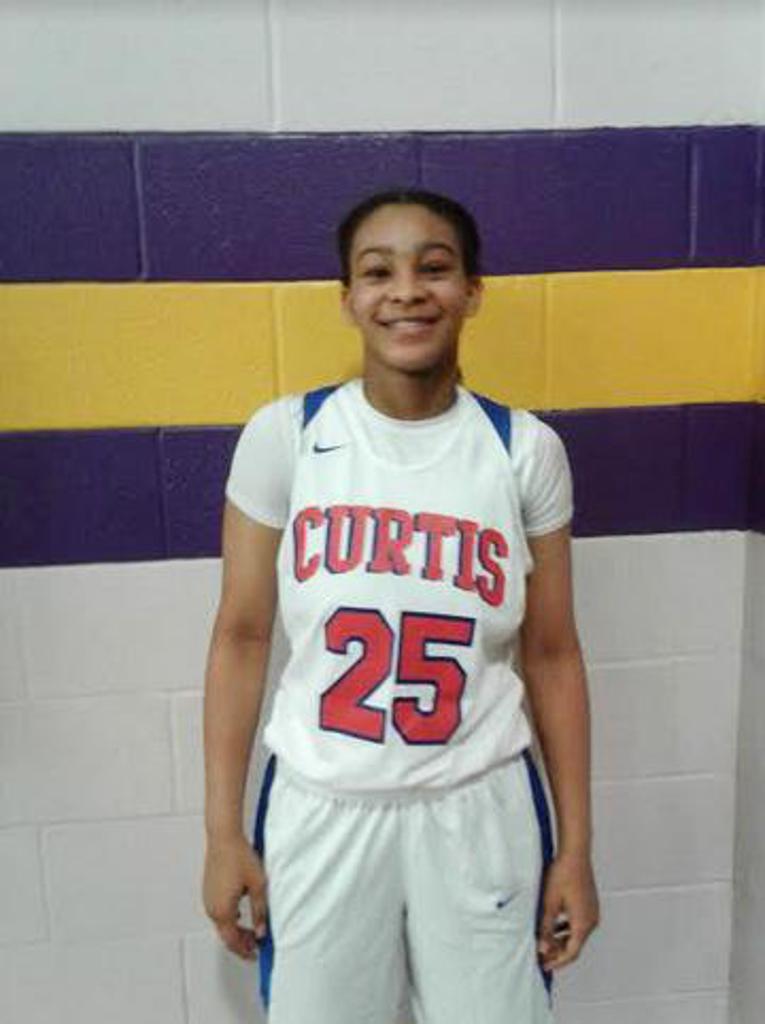 Prior to the event, Graves had some mid-major offers in hand. She likes to work her way into the paint using a spin move. Once In the paint, she has good instincts at following her shot for potential put-backs. Other pluses are good size and above average court vision. Thanks to this event, she has likely increased her options for the next level.

Similar in strong build to teammate Kennedi Heard, McLemore has a baseline orientation with above average toughness and athleticism. Her perimeter stroke appears to need to become more consistent but D1 schools should be monitoring her maturation.

Somewhat muscular in build, Sam looks to shoot the ball and can make perimeter shots including threes. A definite D1 prospect, being more selective as to when to shoot hopefully will come in time.

Word in the gym was that Smith is more of a track athlete at the next level. If this event was any indication, a future in college basketball should not be ruled out. Possessing good quickness, Smith showed the ability to slash to the basket. As with so many, the question is will she be willing to invest the time into this sport? The raw talent is there! 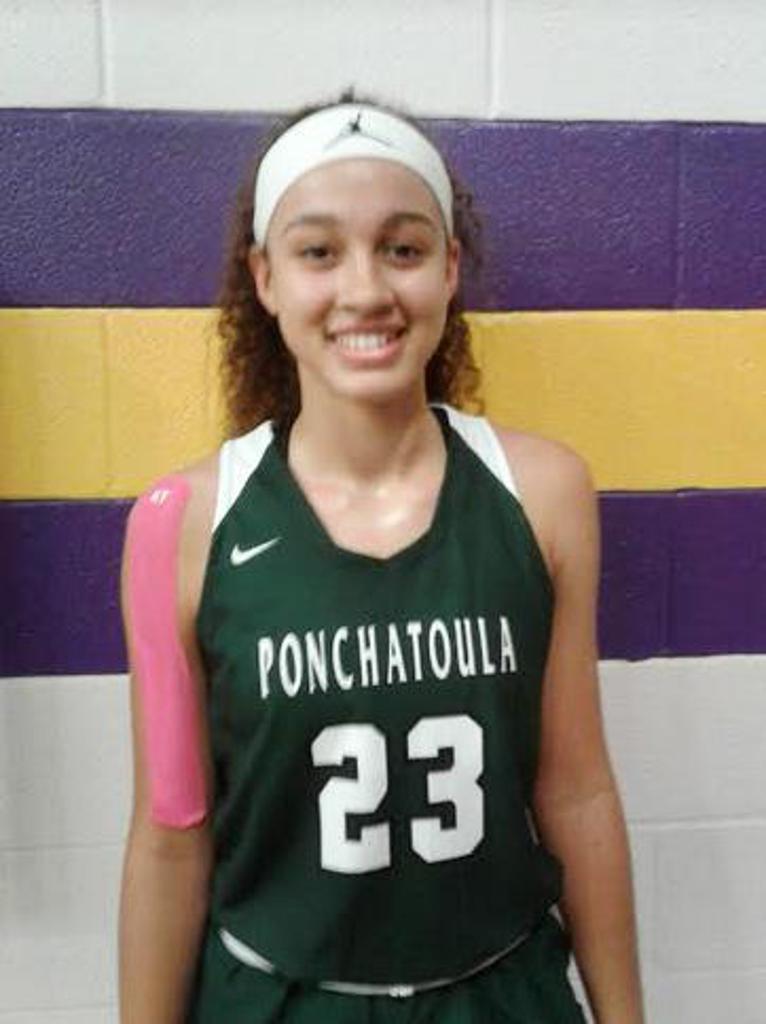 Warren is already a name in Louisiana high school circles. After this event, her stock most likely edged up to where Power 5 schools will be monitoring her maturation. A decent ball handler with size, she has a combination of poise, unselfishness and court vision. Warren can spot up for the three. Her foul shot appeared solid, repeatedly going through the hoop without disturbing the twine.

In spite of a knee brace, Williams moved well without the ball demonstrating a good motor. She also showed the ability to hit the three-ball. Knee brace or not, D1’s should be monitoring her maturation.

2022 – all below showed flashes of D1 potential but still need to have their games mature.

A good athlete, Myer appears to like the to work the baseline. With good “ups,” she showed some shot blocking ability.

A decent athlete, Sherman showed a willingness to move without the ball but with purpose and be active at both ends. When viewed, she was not a big factor but still seemed to have an IQ/athletic combination that makes her worthy of monitoring by D1’s in the years ahead.

A decent athlete, Womack showed some perimeter stroke off the bounce and ability to handle the ball. 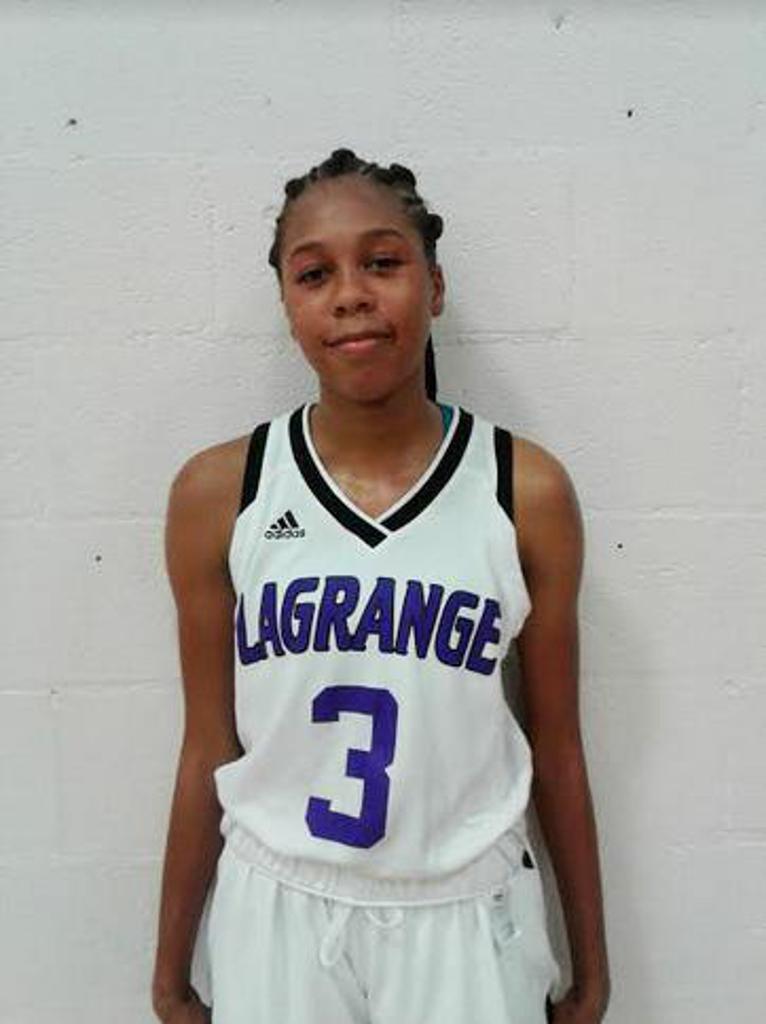