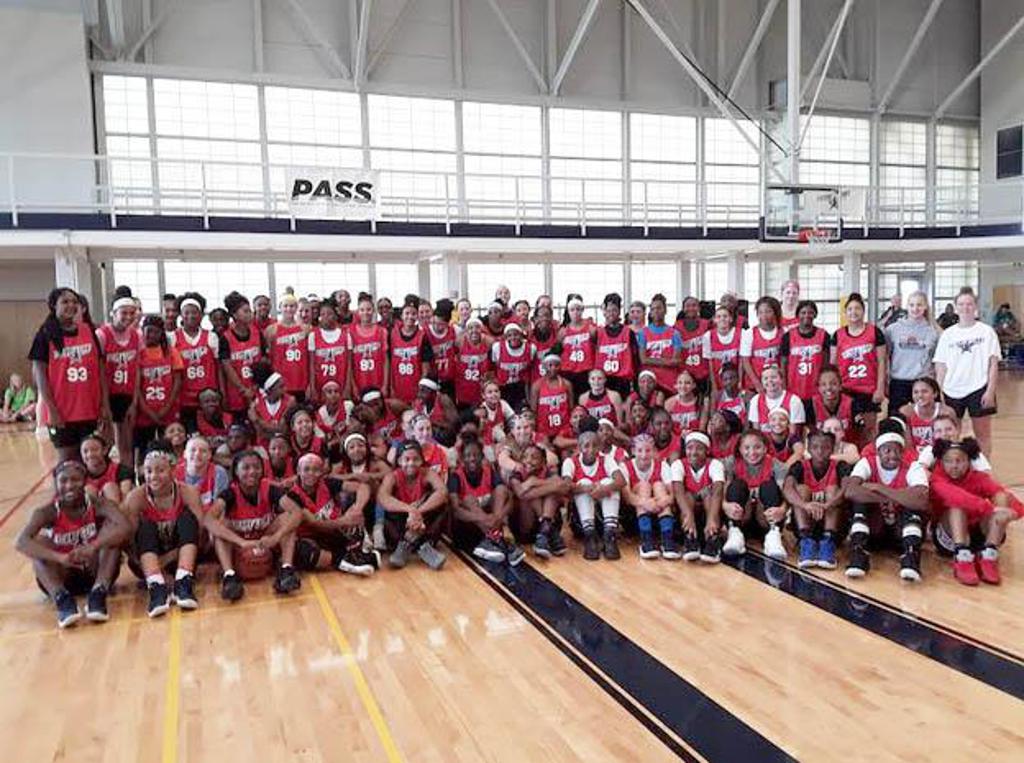 At the top of its game!

Held July 26 on the campus of Georgia Tech in Atlanta, Georgia, Future Stars USA, in its fourth year, put a very talented field of 100 prospects of the classes of 2022, 2023 and 2024 on display. The event was run by Harry Elifson and Scott Reed of Preferred Athlete Scouting Services and presented by Collegiate Girls Basketball Report. Sixty-one colleges with over half of the Power 5 variety watched these talented athletes play in two of the hour-long sessions which ran between 1pm and 6pm.

A good event for both Power 5 and mid-major programs

Granted most programs are looking at prospects in the classes closer to graduation. Still where can you see over 90 D1 (say 30 of whom future Power 5) recruits in just five hours? The Nike EYBL! Where else?

In an era where the talent is increasingly spread out, Future Stars gives you lots of meat with almost no filler! Both mid-majors and Power 5 programs should make it a point to attend next year! The time will be well spent!

To parents and players...

If invited to an elite, invitation only exposure camp like Future Stars, it should be considered an honor. However, regardless of how the player shows off at one of these talent-rich camps, it must be remembered this is just the start of the long march toward playing at the NCAA Division 1 level. Continued improvement through hours of hard work in team practices and individual workouts is really critical toward reaching such a goal. Remember to work on weaknesses (not just improve strengths as most do) and strive for excellence!

Note the names below as they will become better known in the years ahead. A few very good ones were purposefully omitted as they were featured in another July 2018 Pass Tha Ball article. Quite frankly, there was too much to come close to fully absorbing all of it in just five hours (perhaps the best as to a concentration of talent in all of the July evaluation period)!

Players below are listed alphabetically giving height and position within graduation year with home town in parenthesis. All below will, with normal progression, be recruited at the NCAA Division 1 level, how high may well depend on final height and how they fill out in body type. Maturation of those below should be monitored from the Power 5 level and down.

Bollin scored around the basket but also hit multiple threes. For her size, she has decent handles.

Highly athletic, Bonner is explosive getting out on the fast break. She showed the ability to finish with contact. Some shooting range was shown but more still could be added.

Buggs was one of the most impressive players at Future Stars. Highly athletic, she demonstrated the ability to run the break, drive in the quarter court and shoot with range from the perimeter.

Dunn showed the ability to finish in both open and quarter court settings. Physical in nature, she was very efficient in attacking from the perimeter or beginning her move in the paint.

Highly athletic, Jackson showed she can power to the hole from the perimeter. She is also willing to hit the boards and go inside to score in the quarter court.

Jackson was most impressive with her ability to stop on a dime. That said, not surprisingly, she has good body control in attacking the basket and looked smooth doing it. For one looking to score, she also appeared to be a good passer.

Johnson showed a blue-collar mentality treating the camp like it was a major game. She played hard, passed well and showed she could hit the three.

A good athlete with big time ups, Latson showed she could score in traffic in penetrating to the rim. Her passing and court vision are above average. Becoming a more consistent outside shooter is something to work on. Coming from a military family, word in the gym was that she will be moving to Georgia for high school.

Light on her feet, Lau was the surprise (exceeding expectations) of the day to some of those who had knowledge of her game. She displayed good versatility in her game. She played under control while demonstrating both the ability to attack the basket and shoot the three when guarded!

Nnaji showed good footwork in scoring in the lower key. Offensively, she possesses a nice face-up stroke in the key but also can successfully attack the basket going to her right. Nnaji was not afraid to attack the boards for rebounds.

An above average athlete, Tyler showed the ability to drive to the rim using either hand. She also can hit the three.

Archer combines good court vision and passing ability with a high level of competitiveness. Although on the thin side, she was willing to get knocked around in attacking the basket and still was productive.

Davis played with a good motor. She showed nice handles and good court vision. She needs to grow a bit and fill out. Considering her willingness to attack, developing a mid-range pull-up to replace some of the floaters would also increase her stock.

Kelly showed nice court vision on the fast break. She demonstrated a pull-up jumper something more players should have. Finally, Kelly was quick on defense.

A quality athlete fairly strong in build, Sheppard showed exceptional balance in succeeding to attack the basket from the perimeter. An added bonus is that she can shoot the three.

Williams can play the point but primarily looks to score. She showed a nice variety of offense with threes, spin moves and floaters. She can also finish on the fast break.

Bush understand the position very well for someone so young. She has good handles, court vision and is willing to attack. Growing taller is probably the number one priority for the next few years.

Dudley showed versatility in scoring by attacking the basket from the perimeter, finishing going left or right. She also demonstrated a nice face-up stroke in the key.

McGill is very advanced physically in both height and having her body already filled out for one just entering grade seven. Watching conditioning should be as important as developing skills which are already there to an extent.