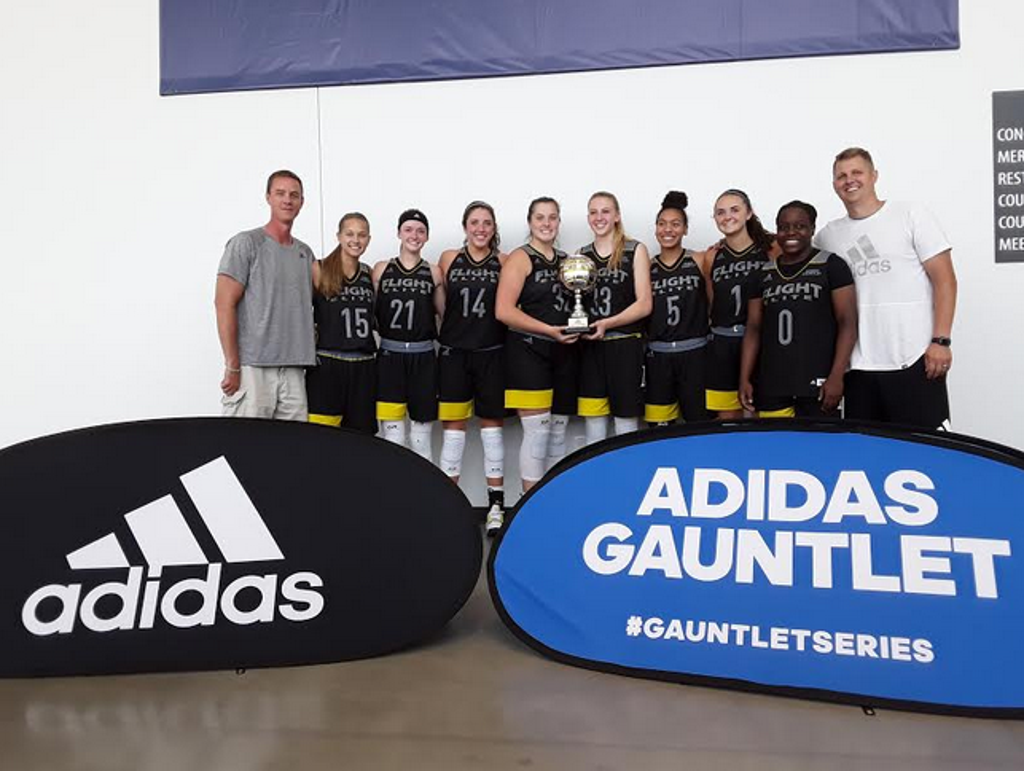 Held July 27-29, 2018, at the LakePoint Champions Center in Emerson, Georgia, the adidas Gauntlet Summer Championships saw 189 teams do battle in six divisions. The most coveted title of champions of the 17U Platinum Gauntlet was taken by WI Flight Elite 11th Gauntlet out of Oshkosh, Wisconsin, defeating Books and Basketball 17U Platinum out of Glassboro, New Jersey, by a score of 61-57. Approximately 300 college coaches representing schools from NCAA Divisions 1, 2 and 3 plus the NAIA and junior colleges attended one or more days of the event. About 90% were from NCAA Division 1 from all over the United States as this was a national event.

Who participates in the adidas Gauntlet?

In order to play in the adidas Summer Championships, a team had to play in one of the spring events held concurrently in Atlantic City, Dallas or Phoenix in April. Ninety teams of the 189 were more fully involved in that they also played earlier in July in the Gauntlet finals in Kansas City. All teams vying for the Platinum title discussed below were in Kansas City prior to coming to Emerson, Georgia. This summer marked the third year of the current format of the adidas Gauntlet, all concluded in Emerson.

Books and Basketball had the best individual talent (Baines) in the contest plus a quickness edge at point guard. WI Flight countered with a team deeper in likely Power 5 prospects.

In the first few minutes, both teams seemed to have the championship jitters missing easy shots and making turnovers. Books led by six for much of the first five minutes as its physical play bothered Flight which could be physical themselves. In the latter portion of the half, WI Flight got into a better offensive rhythm and managed to equalize at 28 (even leading temporarily by a point or two) at half. WI Flight was led by Cassie Schiltz (5-11, shooting guard, 2019) with 12 points while Azana Baines (see below) led Books and Basketball with 11 points.

The second half saw the team from Wisconsin gradually take control going up 42-37 at the 9:26 mark and in control 51-40 with 3:18 left in the game. Books made a late run but could get no closer than the final four-point margin. Keys to the second half were the 15 points (team high 18) by Flight’s McKenna Warnock (6-2 guard/forward, 2019) and the all-around play of Leilani Karpinus (see below) who chipped in 10 points along the way. Baines (see below) led Books with 21 points followed by Lola Mullaney (5-11, shooting guard, 2019) with 13 points. The title was the first in the 17U Platinum Gauntlet won by WI Flight Elite which finished fourth last year.

Baines was one of the top prospects of the 2019 class at the adidas event. An athletic lefty, she can finish at the rim going left or right. In scoring 21 points in losing the final, she posted multiple threes in each half so range is not a question.

Brown had games she scored well in during the event and more quiet performances when getting fewer touches. She uses either hand well to score close to the rim. With adequate footspeed, she has Power 5 offers in hand. 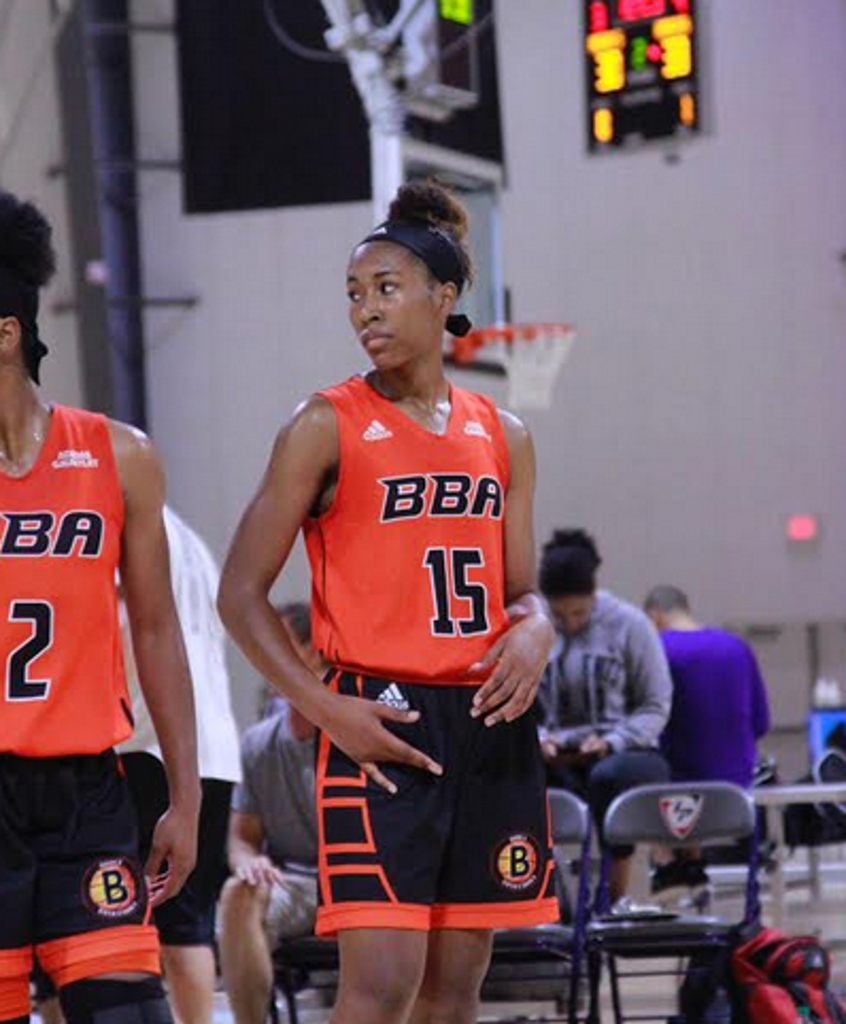 A set of twins orally committed to Fresno State, both play with high energy helping their team finish fourth in the 17U Platinum. Both shoot the three but Haley tends to do more of the ball handling.

Gregory showed offensive versatility as arguably her team’s best player at the event where Team Lex finished third in the 17U Platinum Gauntlet. She can shoot the three but also gets into the lane to score, reading angles of attack well. Power 5 programs are pursuing her.

Marisa was in Emerson (as she has been during the club basketball season) the main spear carrier for this Bruins club. Marisa scored off the bounce at midrange, in transition and can hit threes. She has multiple offers from the Power 5 level and down.

Bostic is strongly built and not afraid of contact in the paint. She also showed a nice mid-range face-up stroke and appeared to be her team’s number one scoring option at the event. She has multiple offers from the Power 5 level and down.

Long orally committed to Iowa State, this coach’s daughter can play either guard slot. She appears a bit thin but will mix it up attacking the basket. She can hurt the opposition with the three ball and at mid-range.

Kapinus would be our pick if a 17U Platinum Gauntlet MVP would have officially been named (It was not.). In helping Wisconsin Flight win the title, her contributions were in many areas including scoring (mid-range and drives to rim), high energy on defense and getting critical rebounds. She has offers from the Power 5 level down.

Layden is unusual in that over six feet tall, she clearly wants to play ball in hand. Perhaps her pass first mentality comes from being a coach’s daughter. For scoring, she appears to like to shoot from deep off the catch. She is being pursued from the Power 5 level down. Both Bostic (above) and Layden have mothers who played Division 1 basketball. 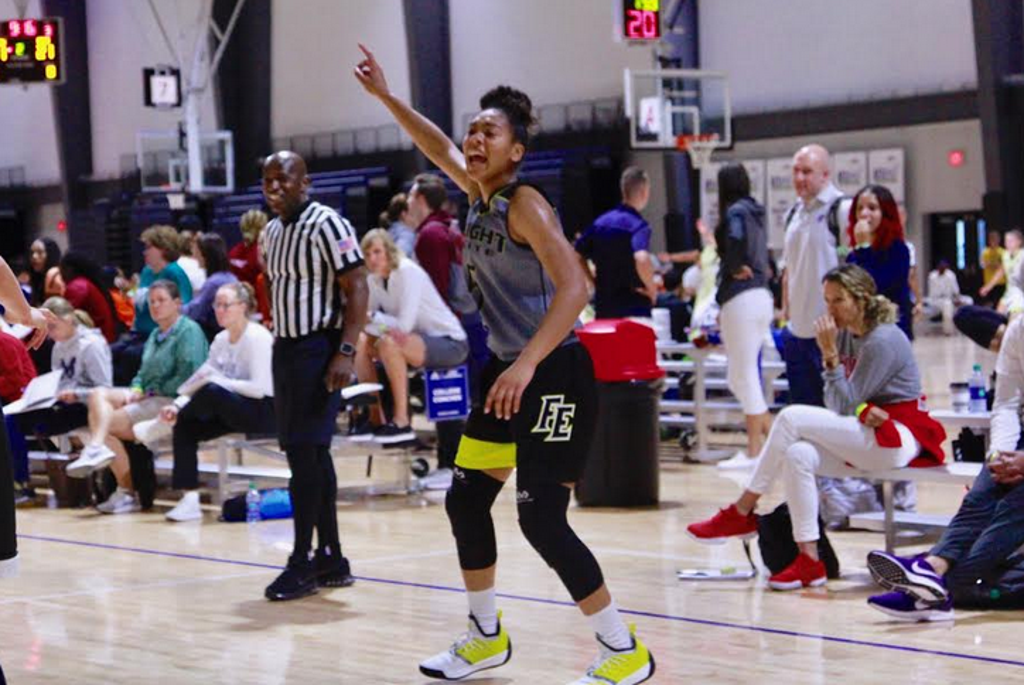 McKinney was a consistent producer for her team in Emerson shooting threes and pull-up jumpers. While thinking “score”, she will give up the ball to a more open teammate and moves well without the ball. Word in the gym was that currently she has multiple mid-major offers.

Van Gytenbeek, orally committed to Stanford, has an entertaining style of play. She plays with high energy whether framing passes with perfection, cutting through defenses or shooting perimeter shots. One of the real crowd pleasers to watch in Emerson!

On coaches’ row, Hart appeared to be the most talked about amongst a talented group of Fury freshmen. She is solidly built and has good footwork around the basket scoring in the lower key. She gets from end to end with adequate footspeed. Power 5 programs are now ling up. 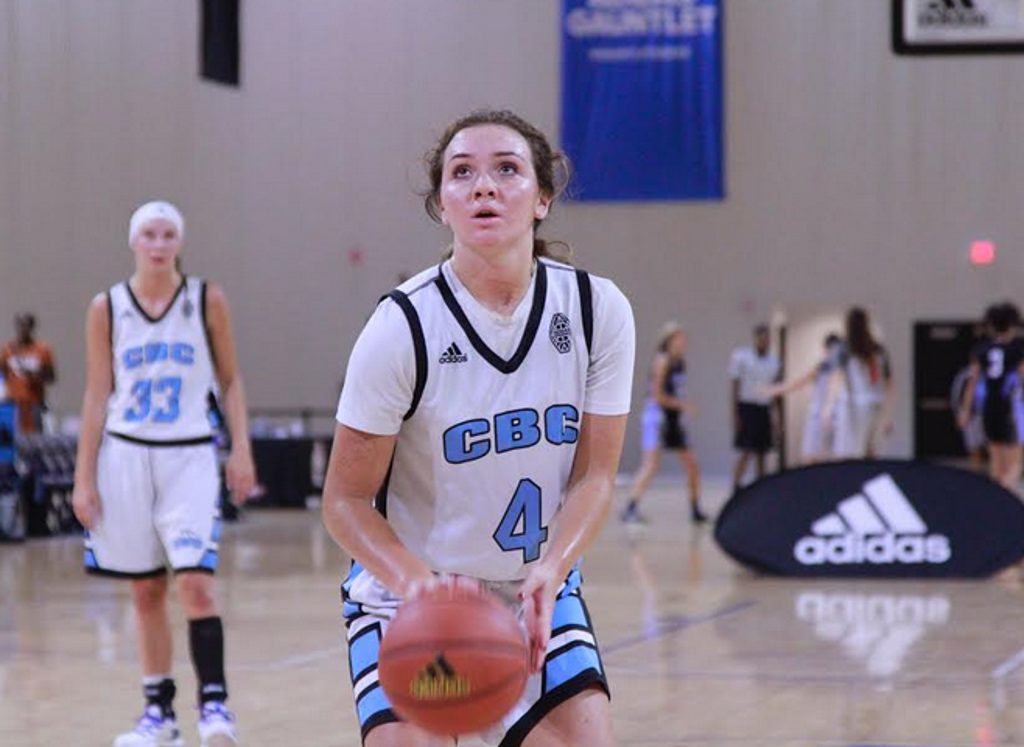 An athletic lefty, Morris can shoot the three usually doing so in the flow of the offense. A good leaper, she is also willing to hit the glass. Power 5 schools should be monitoring her progress.

Von Oelhoffen comes from quality athletic genes with a father who had a long NFL career and mother who was a Miss Basketball in Washington in the 1980’s. With good size, medium-solid build and above average court vision, she can shoot the three off the catch or attack the basket. Power 5 schools are lining up.

Gardiner is considered one of the top post prospects nationally in the 2022 class. With 6-3 height and a strong build for such a young post, she has advanced footwork in the lower key. An added plus is a nice mid-key face-up stroke. 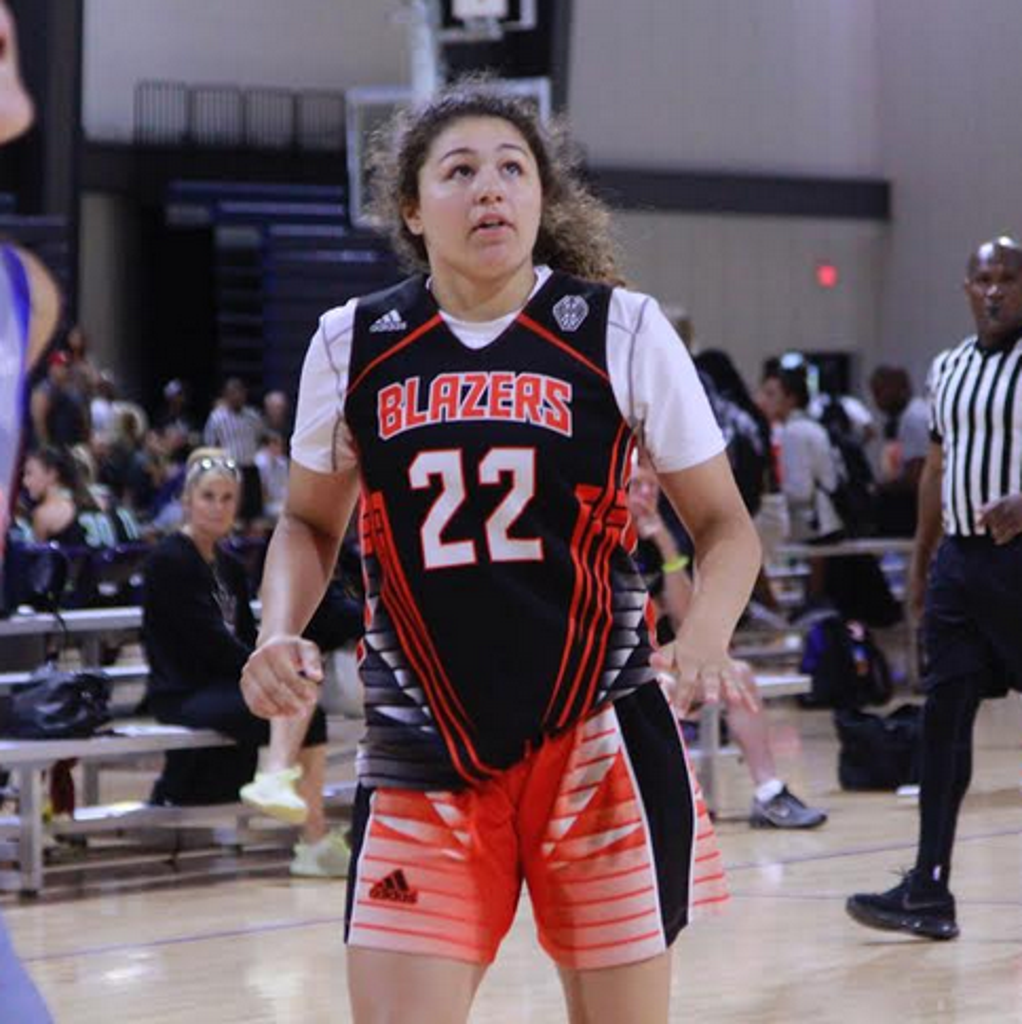 Walker combines above average athleticism with a willingness to share the ball. She frames her passes well and does not force the action. If anything, at times she might want to be more individually offensive minded. Like so many her age, she still needs to get stronger. Her maturation should be monitored from the Power 5 level down.

Watkins is considered to be one of the top wing prospects in the 2023 class. Playing on a team with players as old as the 2020 class, at times she stood out. At other times she was more in the background as older teammates dominated the action. Above average athletically, she has advanced understanding, good stroke mechanics and handles  well for one so young. At times her lack of being fully developed physicality trips her up as she may force a move. The outline of a high major D1 prospect is already there. The player herself and those close to her need to give her time to develop, not being frustrated by errors but rather learning from them. 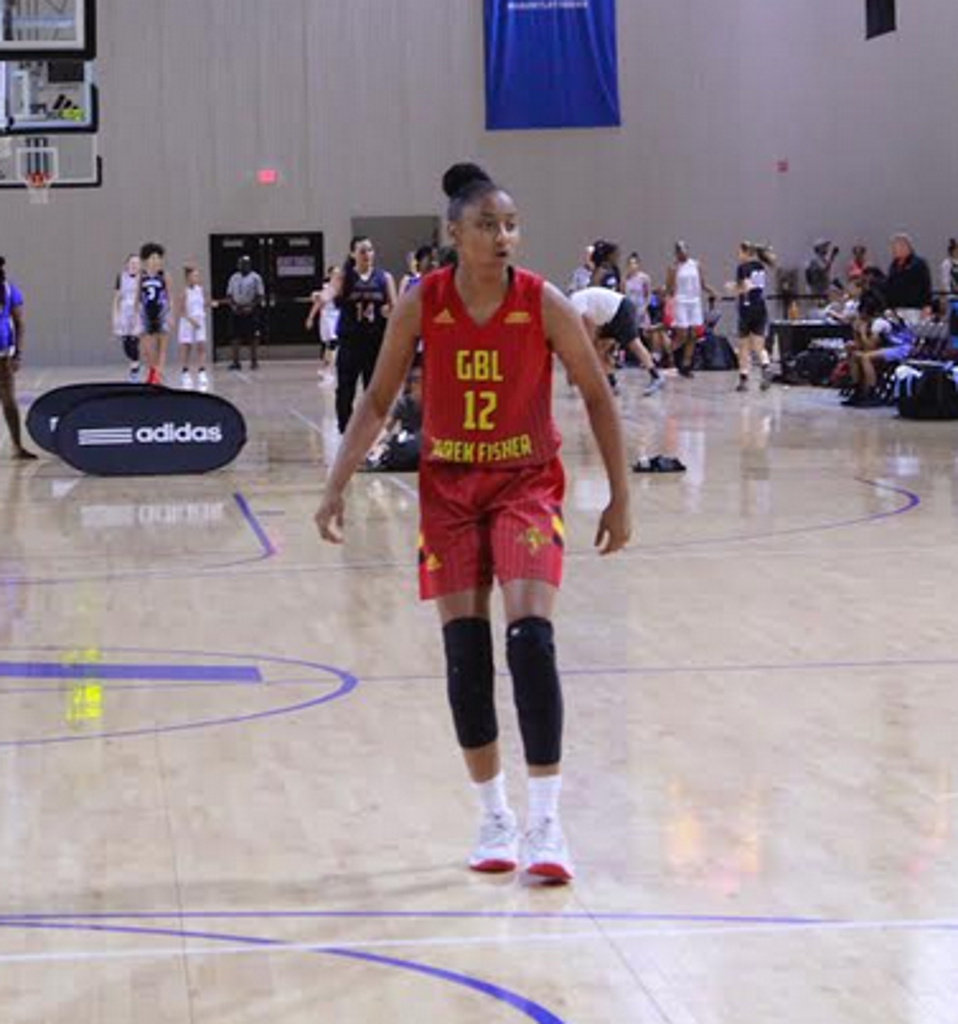