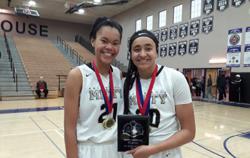 Below is the first Pass Tha Ball Prep Polls in Review for the 2017-2018 season. Last season finished with three different teams winning at least one of the four mythical national high school championship polls. A fourth (St. John’s of DC) won this combined title garnering the most votes amongst the four polls without being first in any!

This season currently has no disagreement as Archbishop Mitty of California sits first in each of the four polls. Mitty’s claim is based on winning the Nike Tournament of Champions before Christmas beating three of the current consensus top 10 and remaining unbeaten to date.

The polls seem to agree on who the top eight teams are. After that, opinion diverges significantly. All told 39 high schools were mentioned in at least one of the top twenty-five lists.

A lot of data has now been logged with Christmas tournaments and December/January showcase events completed. However, past years have shown there will be upsets as states get into playoffs with more competitive match-ups than most of league play has to offer. The race is far from over!

Re-classing is the practice of allowing a player to repeat a grade and thus play another year of high school sports thereby giving a student-athlete the opportunity of participating in five years of high school sports. Re-classing is most common in privately run “prep” schools where an incoming sophomore (could be younger) or junior is made to repeat the freshman or sophomore year. In those schools’ opinion, this gives the student-athlete a better chance to be fully prepared for college academically and athletically.

As a general rule, NFHS members (the “state” organizations) and NFHS affiliate members (private school organizations in states where private schools are mostly excluded from the state organization but play for a state title with schools of like kind) do not allow this practice, instead adhering to the “eight-semester” rule as to eligibility upon entering one’s freshman year of high school (no red shirting as in college).

Many NFHS member schools, either individually or collectively, choose not to play “re-classers,” arguing those institutions already recruit players and now want us to play against someone who should already be in college by age or playing experience. They believe that this is not a level playing field, and to extend to here not fair to rank both kinds of schools in the same poll.

In many states, the NFHS member organizations will not allow their members to schedule schools that they know are practicing re-classing. Pennsylvania’s PIAA has taken the issue even further asking its member schools not to play any school that “re-classed” a player as young as grade seven!

The opposing argument (taken by at least one poll) is to not consider schools that are “re-classers” but only rank “non-re- classers.” These include NFHS member schools (of which examples would be any public school or say Mitty which is private but a full CIF member), NFHS affiliate member schools (Paul VI would be one as a VISAA member) or totally independent private schools whose policy is not to re-class (Hamilton Heights is one). The thinking here is to draw a line and let each school decide which side of the line they wish to live on (no going back and forth year to year!).

Perhaps someone will do a national ranking for schools that re-class (most private boarding preps and a number of independents that re-class less frequently). There is nothing wrong about re-classing, just the question if such schools should be eligible in a poll where re-classing is generally not allowed by the grand majority of candidate schools.

The MaxPreps computer ranks over 17,500 in the sport. Our guess that the number is close to 18,000. So, realize how great the honor is to be in any poll recognizing only 25 schools!

ESPN refers to its poll as "Power Rankings". It is the most forgiving of losses, looking at what would be expected of teams if they met in the future (who's better in a theoretical future meeting which may never occur).

Teams with location are listed according to total number of points garnered 25 for first down to one for 25th place. Where there are ties, teams are listed alphabetically. Again, for more details on each team, see the four polls individually. Another review will come out in a few weeks with the last one in April if all goes as planned.