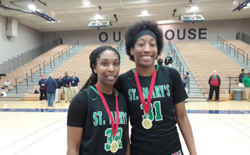 Below is the second Pass Tha Ball Prep Polls in Review for the 2017-2018 season. While the top two spots remain the same, there has been plenty of shift below in the last month. More will be coming before the season concludes on March 31. Our composite relies on the four individual polls. Please do not be stressed as to accuracy as several of the teams below have lost since those polls came out last week!

Archbishop Mitty of California continues on top in each of the four polls. Fellow undefeated Christ the King of New York sits second with once defeated (by Mitty) Riverdale of Tennessee now third. Riverdale, having just won its third state title in a row, essentially blocks anyone below them from winning our composite title. Both Mitty and Christ the King have several more games until they can finish on top in their respective states.

Five teams entered our list since last month. Amarillo and Plano came in through upset victories in claiming state titles in Texas. Winter Haven jumped the most to 13/14 from 23/24 in winning a state title in Florida. Duncanville had accomplished so much in the view of the polls that they remained in this composite in spite of failing in its attempt to win three titles in a row in Texas.

The Geico High School Nationals (formerly sponsored by Dick’s) will be held at Christ the King High School in New York City. The semi-finals are scheduled for Friday, March 30, with the final the next day. Only a few states allow its schools to play so the field sadly does not come close to deciding an end of season national high school champion on the court.

Our picks to be invited are Hamilton Heights (a total independent), Central Valley (Washington 4A champs), Winter Haven (Florida 8A champs) and Riverdale Baptist (an Approved Non-member from Maryland). Westlake (Georgia 7A champs) would be a good addition but at last check could not play a school like Hamilton Heights. Thus, the organizers must choose one or the other unless permission is granted by the GHSA (governing body in Georgia). Sadly, host school Christ the King High School (more highly ranked than all above) will not be allowed to participate unless special permission (very unlikely) is granted from New York’s governing body.

The rationale in the summary: "In some instances, these schools are not allowed to compete with member schools of their own state because they are not required to follow the same eligibility rules. The proposal would help to ensure that CIF member schools are playing other education based high schools and not academy like programs."

Just above in bold print are the proposed rule change and explanation for CIF schools as to whom they may play. I have since been told the rule would go into effect in 2019-2020 (an extra year out). What the rule would do is prohibit play not only against schools (so called Independents) not affiliated with a NFHS (National Federation of High Schools) “member state association” member but also schools currently playing under “a NFHS Affiliate Association.”

What the architects of the proposal may not understand is that in a number of states (Texas will be used as an example.) just about all private schools are not allowed to belong to the “NFHS Member State Association” but may be playing in a post-season playoff under a “NFHS Affiliate Association.” In California, there is no similar NFHS Affiliate with all competing under the CIF banner.

For example, Archbishop Mitty High School of California is a CIF school but similar school Bishop Lynch High School of Dallas, Texas, is a full member of NFHS Affiliate TAPPS (Texas Association of Private and Parochial Schools) participating in its post-season playoffs. Is the CIF looking to block competition with such a school? One can find similar examples in other states with a NFHS Affiliate Association.

The proposed change appears aimed at the very few NFHS members schools that act more like independents (as to recruiting, travel, game count) in that they do not play for a post-season “state title” but have otherwise been placed under the NFHS banner by a willing State Member.

The proposed fix below would still allow for tightening of the rules but eliminate what might be unintended consequences of the proposal.

So, what should happen assuming the above was not intended to limit play against schools participating in post-season play under NFHS Affiliate Associations?

Add the wording in bold:

ESPN refers to its poll as "Power Rankings." It is the most forgiving of losses, looking at what would be expected of teams if they met in the future (who's better in a theoretical future meeting which may never occur).

Teams with location are listed according to total number of points garnered 25 for first down to one for 25th place. Where there are ties, teams are listed alphabetically. Prior ranking is listed in parenthesis. NR indicates not ranked in previous poll. Again, for more details on each team, see the four polls individually. Last review will come out in April if all goes as planned.