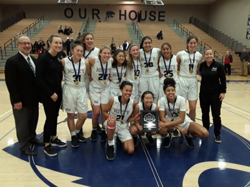 Archbishop Mitty of San Jose, California, finished first in this season’s final Pass Tha Ball Prep Polls in Review capturing the title bestowed by both USA Today and the espnW 25 Power Rankings. Riverdale of Murfreesboro, Tennessee, received the title from Blue Star Media and Central Valley of Spokane Valley, Washington, garnered the title with MaxPreps. St. John’s College High School, winner of last year’s composite ranking in spite of having won no individual poll, finished fourth this year. Mitty can claim the top honor for this year having finished first in two of the four polls and scoring very high in the others!

State of affairs at end of this high school season

Since our last composite review, the two most surprising developments were the defeat of Archbishop Mitty in triple overtime to Pinewood (ranked below) in California’s Open Division and Christ the King (ranked below) losing in New York’s Federation final to Baldwin which finished fifth below. Riverdale went on to win out in Tennessee as did St. John’s College in its league and DC (for those District schools the equivalent to its state championship).

Four teams entered our list since last month. Highest debut went to Windward School coming in at #9 after winning the prestigious California Open Division. Baldwin (#17 to #5) and Central Valley (#11 to #3) made the biggest jumps. With over 18,000 varsity girls basketball teams in the USA, let us all applaud all 25 below for outstanding performance in the 2017-2018 girls basketball season.

Mitty beat St. John’s College, Riverdale and St. Mary’s of Stockton (ranked below) on its way to capturing the Nike TOC in Arizona. Back in California, they also posted several other quality in-state wins, most notably Pinewood (ranked below). Catching the injury bug, Mitty lost in triple OT to Pinewood (after having beaten them) thus not winning out in California. Mitty supporters point to its national top-five quality wins and solid in-state schedule. Detractors ask if you can be judged “best in the USA” if not best (winning out) in your own state at season’s end?

Riverdale won out in Tennessee and can point to wins over ranked (below) Centennial, Riverdale Baptist and Mercer County. You can add in wins over Collins Hill of Georgia and Brentwood Academy of Tennessee, both of whom spent time in one or more individual polls plus Alabama 6A champs Hazel Green. Playing a strong schedule, its one loss was to Mitty at the Nike TOC in December.

Central Valley finished undefeated and beat two nationally ranked teams at the Geico Nationals after thoroughly dominating the State of Washington. Due to geographic (much closer to Idaho than Seattle) and financial considerations, the team only played one out-of- state team (Post Falls which won a state title in Idaho). Thus, strength of schedule was not as high as the other three schools discussed here.

St. John’s College had two losses (to Mitty and Paul VI [ranked below]) but had the most high-quality wins. These included three teams (Baldwin of New York, Centennial of Nevada and Grandview of Colorado) which won state titles plus six wins over teams (two over Bishop McNamara of Maryland, two over Paul VI [ranked below], one over Sacred Heart of Kentucky, one over South Shore of New York) which had appeared this season in one or more of the national rankings. Like Mitty and Riverdale, St. John’s played a tough national schedule but did lose twice. Thus, the question here is how many quality wins does it take to equal or outweigh a loss as to ranking?

espnW refers to its poll as "25 Power Rankings." It is the most forgiving of losses, looking at what would be expected of teams if they met in the future (who's better in a theoretical future meeting which may never occur).

USA Today (oldest poll) and Blue Star Media (run by a former USA Today pollster) use similar methodology, tending "to be more record oriented than ESPN, but more willing to forgive losses by perceived "good teams" than MaxPreps. Individuals who run the Blue Star and USA Today polls also simultaneously conduct polls for other sports. Thus, due to more limited time availability, these tend to have less actual personal viewing input of teams than the other two polls include (espnW probably highest here in its ranked teams seen in person).

espnW (must set to 2017, Final): http://www.espn.com/college-sports/basketball/women/recruiting/powerrankings?week=99&amp;rankingId=28&amp;season=2017

Teams with location are listed according to total number of points garnered 25 for first down to one for 25th place. Where there are ties, teams are listed alphabetically. Prior ranking is listed in parenthesis. NR indicates not ranked in previous poll. Again, for more details on each team, see the four polls individually. This is the last review of the high school season.