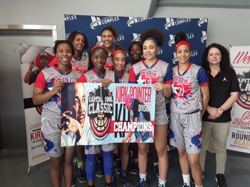 Held May 19-20 at the Finley Center in Hoover (just south of Birmingham), Alabama, 99 teams took to the 11 courts in this spacious one-year-old complex. In its sixth year, the Capital Cool Classic was moved from its prior location in Montgomery (thus the name) and was bigger and better than at its prior location! Presented by Roundball Academy (host clubs Essence out of Florida and FBC out of Georgia), the event saw teams placed in brackets roughly based on age and team strength. A total of fourteen NCAA D2, NAIA and junior colleges attended one or both days of the event from which NCAA Division 1 schools are barred by the NCAA “dead period” rules.

Too much to see!

With the event only running a full day on Saturday and finishing around 3pm on Sunday, there was just too much quality to see. Several division championship finals had to be covered on Sunday so there was very limited time to go searching on outer courts (finals were played on middle show courts with extra seating on bleachers).

Why the ones below?

People ask why some players are written about and others not? Often it is because of exceptional performance (individually or helping her team to superior results at the event). Sometimes, it is due to a significant improvement or unique skill set regarding a player. Finally, it may be to just introduce our readers to a player (often younger) who is expected to be “making noise in the future” but is not yet that far along in her journey.

A brief look at three finals... 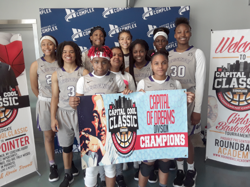 The division was dedicated to Coach Kirk Pointer who passed away within the last year. He helped organize this event in its early days and ran the Nike-affiliated Team Elite club based out of the Atlanta area.

Both teams in this final had won divisions in separate major events in April. Often when two talented teams (used to winning) meet, the defense dominates for much of the game. FBC United, considered to be more talented, led 23-12 at half and 29-21 after three quarters. All Alabama stiffened its defense in the final stanza cutting the lead to three (never had a shot to tie or win) at the buzzer. After a quiet first half, Joiya Maddox (6-0, shooting guard, 2019) came alive hitting from the perimeter (game high 17 points) to help Alabama get close. United had more balanced scoring led by AC Carter (5-10, forward, 2020) with 11 points and Madison Hayes (see below) with 10 points. In the end, bottom line difference may have been better control of the paint by FBC United Hunt.

In spite of several runs by the Flight Sophomores, the Essence team led 10-4 after one, 16-14 at half and 29-20 after three quarters. Essence was more athletic and got to the rim more frequently. Other than Jakhyia Davis (team leading 16 points, see below), no other Flight player scored until about one-minute left in the first half. Trinity Hardy (16 points, see below) and Kennedi Philson (10 points, see below) led Essence Wheeler in scoring.

This final pitted two teams from the same club. Word in the gym was that the eighth graders had won more than lost in prior match-ups. Here it was the more physically mature ninth- grade team dominated from start to finish by controlling the paint more of the time. The 2021 squad led 27-18 at half and 43-33 after three quarters. The 2022’s never threatened to take the lead down the stretch. The victorious 2021’s was led by Amiya Payne (see below) with 18 points and Karoline Striplin (see below) with 15 points. The 2022 squad was led by Karly Weathers (see below) with 17 points.

Davenport is considered one of the top power forward prospects nationally in the 2019 class. What was most noticeable here was an improved work rate game to game and far less periods of seeming to disappear or take plays off. Highly athletic, Davenport’s game is in the key attacking from the high post off the dribble (including some spin moves) but also posting up. She also hits the boards well.

A good athlete, Franklin is a lefty but has added the ability to attack and finish going right. She can score via the drive (first option) but also has a mid-range perimeter stroke. She has offers from the Power 5 level down. 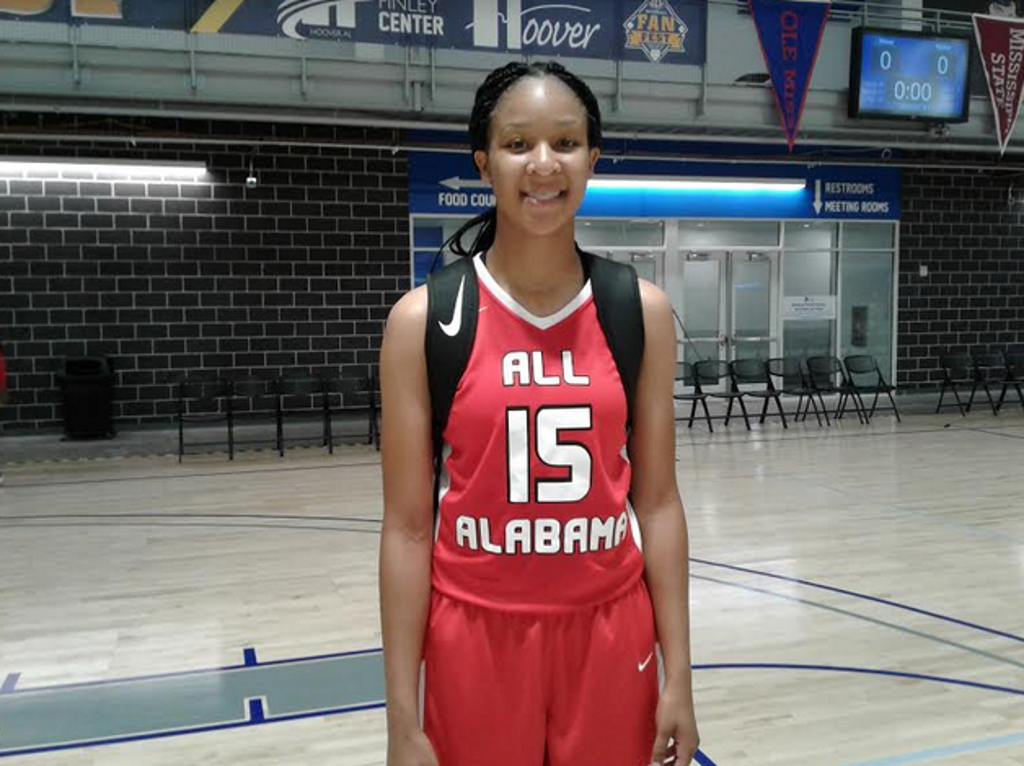 A quality athlete, Henderson demonstrated the ability to attack the basket particularly from the top of the key. She also showed a nice mid-range jumper from the same area. She is being considered by programs from the Power 5 level down.

Boyd is a long, lean athlete that the Power 5 schools love to recruit. She can score via the drive or perimeter stroke (release is currently a bit low). During one viewing, she was most impressive on defense blocking several shots.

In the championship game of the Kirk Pointer Division, Cardosa scored but two points. Yet she dominated the game with blocking (some) and altering (even more) shots plus hitting the defensive glass. Considered one of the top 2020 prospects, her touch from mid-key and in could still get better. Cardosa is returning to her native Brazil for the summer and will not be on the upcoming club circuit. Upside remains very high!

Seen this lefty post maybe five times between high school and club ball. She seems to be a bit more impressive each time and was her team’s best player in Hoover. She is strong but very mobile in build playing hard. She finishes well at the rim going left or right. She can face up in the key but is more attack the rim (including spin moves). She is being recruited by schools in the Power 5 and below.

Hayes, a Power 5 prospect, has a mid-range game but primarily looks to attack. The number one item she brings to the table is a high motor that seems to spread to teammates, making them play harder than they might when she is not on the court.

While she had a couple of good perimeter shooting games at Hoover, what was most impressive was a higher sustained level of intensity than seen on other occasions. Hunt, a Power 5 prospect, did not settle quite as much for the perimeter shot and worked harder on defense in helping her team win its division.

McGhee is a thickly built low post with good hands and footwork. Her body allows her to play even taller than her actual height. She impressed with a variety of spin moves finishing at the rim. Power 5 programs should be monitoring her maturation. 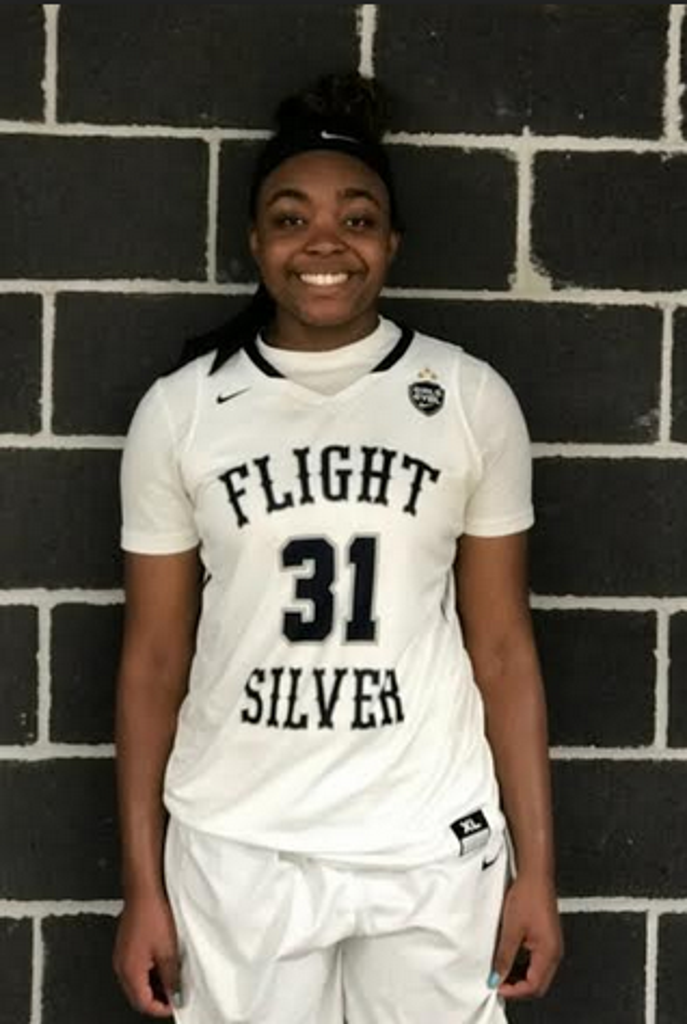 Philson is another player showing improvement since seen a few months ago. She hit shots in the upper key and scored at the rim. Light on her feet, she runs the court well. She could still get stronger as at times, she appeared bothered by physical play. Here is another player for Power 5 programs to monitor.

There is a lot to like in Samuel’s game. A baseline player, she can hit the perimeter shot from inside and beyond the arc. She runs well and can attack the basket from along the baseline but hitting from outside appears to be option one. She plays with both poise and intelligence in picking when to shoot. Power 5 programs should be tracking her if not already doing so.

Homeschooled, club basketball is the primary season of play for Schutz. She runs well showing a perimeter stroke and willingness to take some knocks when venturing into the key. Word in the gym was that she has Power 5 interest if not yet offers. 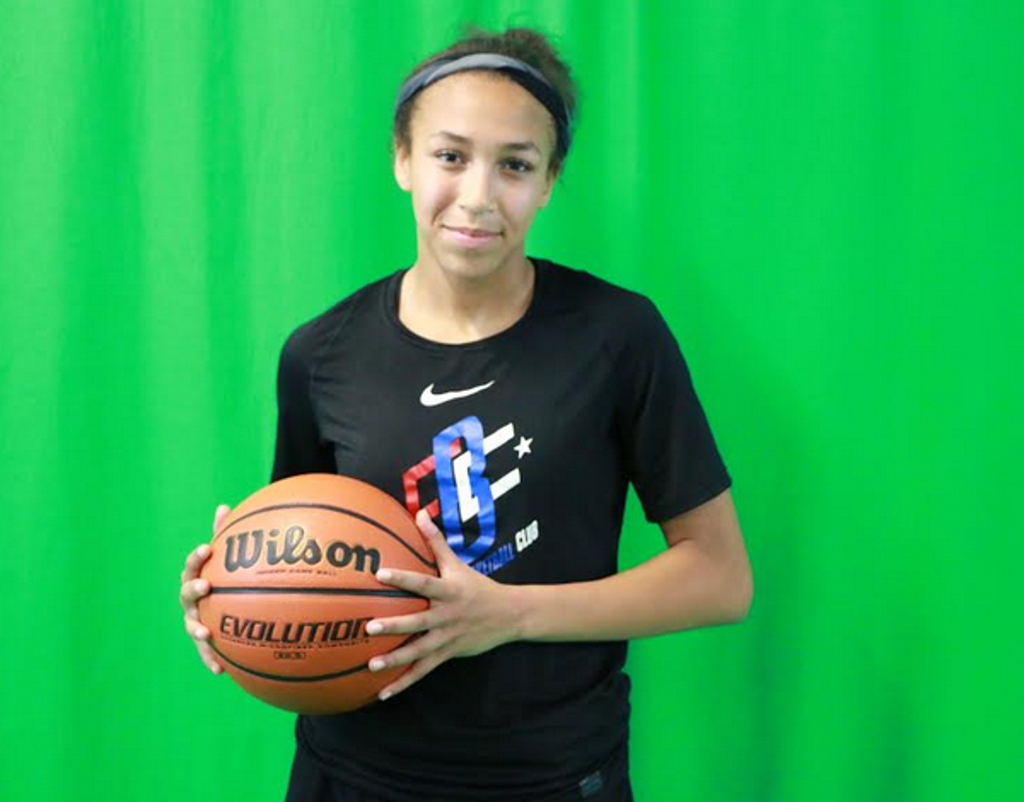 Playing up two years in class, Godfrey showed the ability to function against older players. She has a nice stroke on the wing both inside and beyond the arc. She still needs to become more consistent in production game to game but that is expected in most when playing up in age. Power 5 programs should be monitoring.

Hardy was our unofficial MVP of her team’s final’s victory. She plays hard with a strong desire to drive often right-handed to the rim. Surprisingly, she shoots her perimeter shots (not first option) left-handed!

Highly athletic with a good motor, Payne looks to attack the basket using a quick first step. The perimeter stroke is there but not the first option. Power 5 programs should be monitoring this player come July. 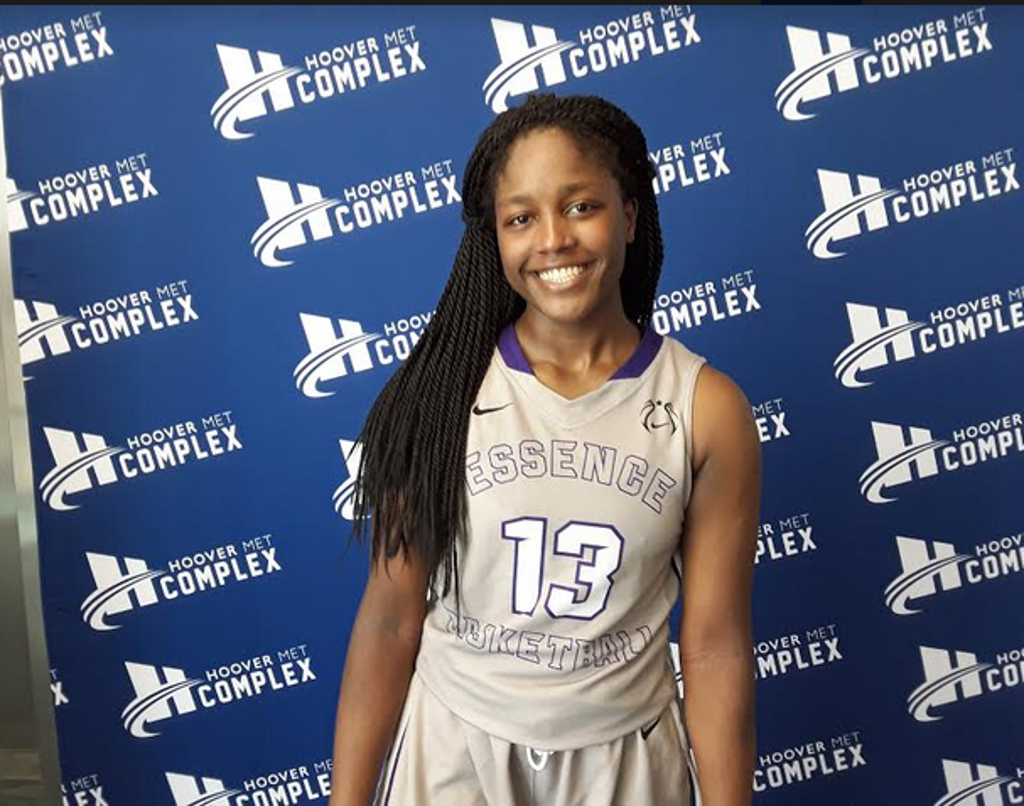 Striplin does most of her scoring around the basket. She also has a nice face-up stroke. Physically strong for her age, Striplin has adequate footspeed. She has offers from the Power 5 level and down.

It would be an error not to complement Johnson's running of her team all the way to finishing first in the division. This is particularly impressive in being a grade younger than the other starters. She continually makes good decisions and involves others. At the other end, she plays solid defense. If anything, she needs to look for her own shot a bit more. One of the top 2021 point guards in the USA, she already has Power 5 offers.

Barker is very advanced for her age but playing up two grades can be a challenge. Some games she scores a significant number of points and some games not. Athletic, she runs well, has nice handles for her size and rebounds effectively versus older players. Foul shooting appears to need work but given everything else, Power 5 programs are lining up. 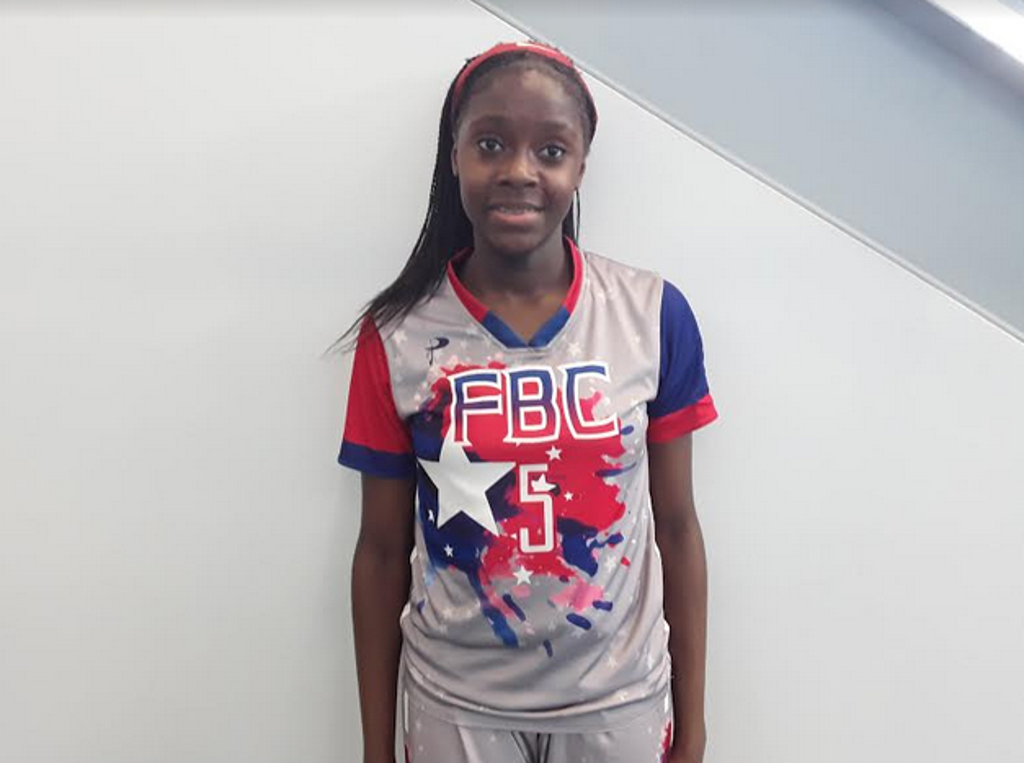 As might be expected, Diakhate is just scratching the surface of her talent. Currently, she runs well, blocks shots, rebounds and is learning to finish near the rim. A Power 5 upside for sure!

Weathers runs well and can knock down threes (five in division final). She needs to fill out and get stronger. With good sports genes (father had long pro baseball career), expect the daughter to succeed in her sports as well!

Seeking more time at point (likely where she will be recruited for college), Utberg moved this spring to the Southern Starz organization.  She understands the position and is looking to balance scoring (mostly shooting from the perimeter) and distributing to teammates.  Physically strong for her age, how much taller she gets may well determine how high up the D1 ladder she gets recruited.  The skills are likely to be there. 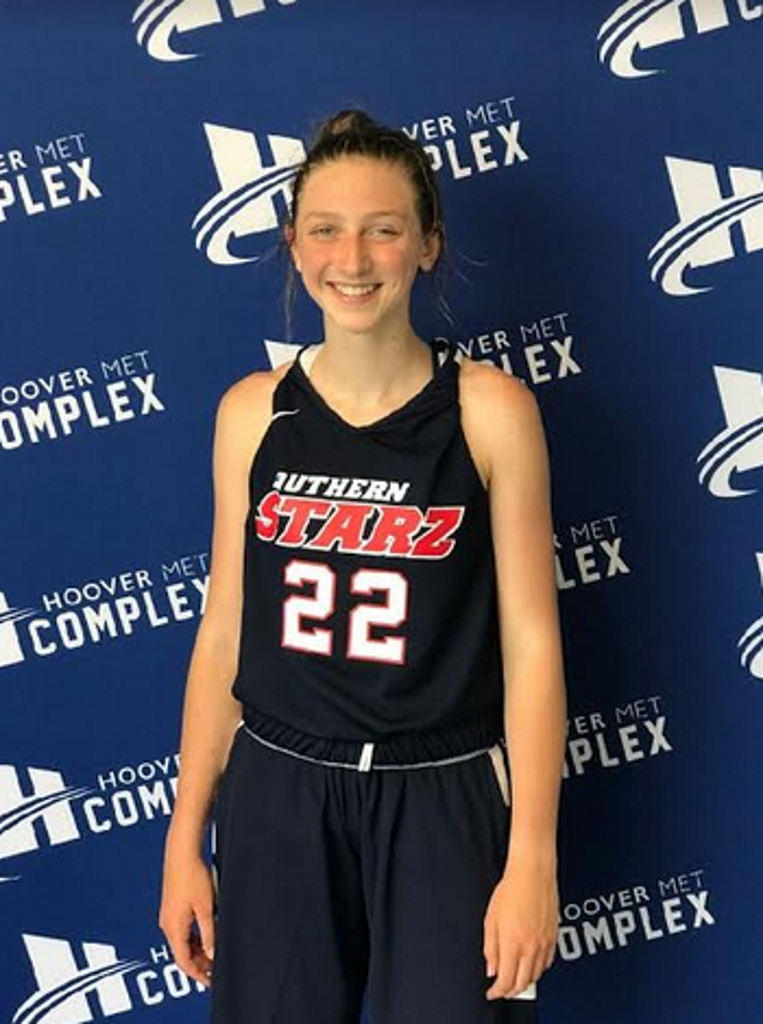 Booker was the most impressive middle-school-aged performer at the event in Hoover. A nice athlete who thinks the game well for her age, Booker can score behind the arc, in the midrange and in the key. With continued improvement, high major programs will be recruiting her.

Cody is another talented (Power 5 prospect) very young post player just scratching the surface of what she will be able to do in the years ahead. She runs well, can block shots and scores near the rim with limited post moves as yet. 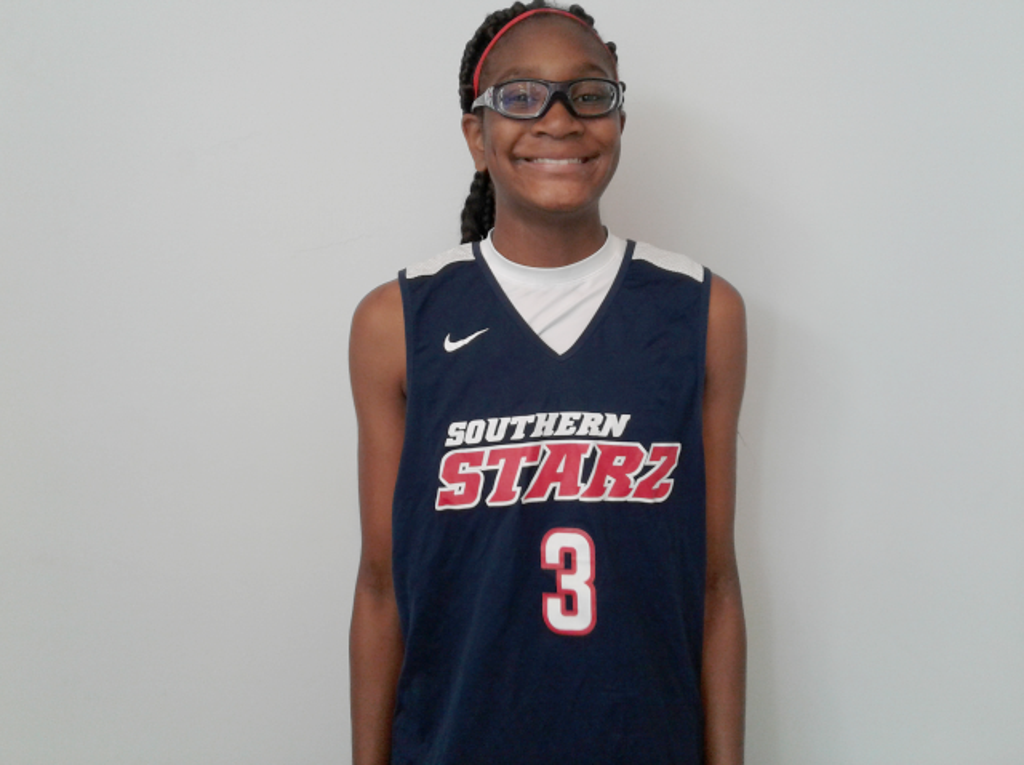 Watson combines speed with the ball, understanding, and perimeter stroke. Advanced for her age, she claims to have stated playing at age four. Having a father who played major D1 basketball is likely one reason that she is so far along in her game. Her final height may help determine how high she get recruited. 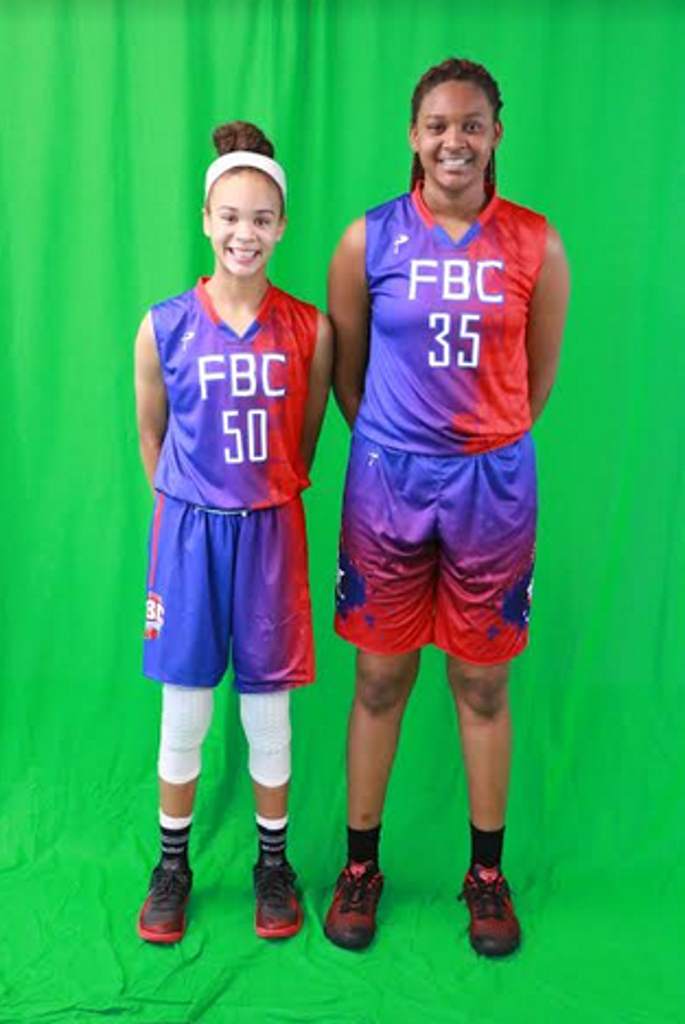