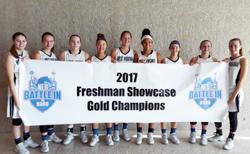 In part 3 of our Boro report, the freshman division will be discussed but before that a couple of other items are discussed.

Move to Louisville a success

This is the first year the Boro (actually named for Murfreesboro, Tennessee, where the event originated) was held outside the Greater Nashville, Tennessee, area.  The move brought all games under on roof with 66 courts at the Kentucky Expo Center venue.  It took about seven minutes to get from court 1 to court 66 (certainly less than getting in a car and driving to another building).  The first 40 or so were in the main hall with the last 20+ around the corner of an upside down 'L'.  I personally covered games as far down as court 58.

So often college staffs are struggling to stay up with recruiting needs, particularly when a new staff comes on board.  Early identification of prospects is most critical.  For players interested in your program, it is important to see them in both the club and high school settings as the prospect often plays differently in each setting.  Sometimes you get the player you saw in club and sometimes the one from high school.

Finish what you start

Maybe a grandparent may have said (just above) that to you.  This year, it appeared more quality teams than ever left without finishing their assigned games.  The reasons varied.  One was that they only came to be seen and with the last day (July 13) in a non-viewing period for NCAA Division 1 schools, they packed and left.  We could argue the right or wrong of this all day but my answer is just above in bold.

Picking up the action in the Freshman Showcase Gold Bracket (first and second place teams from pool play) Final ...

This was expected to be a contest with Flight Silver having the top prospect in All-Tournament selection Dontavia Waggoner (see below) who led all scorers with 21 points repeatedly attacking the basket.

Special thanks to my fellow all-tournament committee member Kyle Turnham for the following report on this contest (most competitive of the three Showcase finals):

"Waggoner got Flight out early 8-0, a lead which was held until the 2:53 mark of the first half.  At that point Thunder's All-tournament team member Eden Gainer (see below) hit a three pointer to put her team up (21-20) for the first time and never trailed the remainder of the game.  West Virginia took a 26-23 lead into halftime."

"The second half belonged to Thunder's All-tournament selection Alexis Arden who carried the bulk of her team's second half scoring (10 for game) powering in the paint.  Flight tied the score once at 46 with 1:21 left to play but the Thunder converted their free throws to seal a five-point win."

For the game the Thunder was balanced in scoring with point guard Bailee Adkins (5-6, point guard, 2020) and Nicole Stephens (5-6, combo guard, 2020) also chipping in 10 points each.  Division MVP Madison Mace (see below) contributed nine points in this game.  Her timely scoring and regular energy boosts coming off the bench during the week earned her the MVP award for a very team-oriented squad.  For the Flight, point guard  Destinee Wells (see below) also received All-tournament honors regularly contributing in multiple areas for her team.

Players below are listed alphabetically with height, position, graduation year and club team with home town in parenthesis.  The criteria for selection was performance at the event in conjunction with success of the team.  For players to qualify, their team had to complete its respective tournament schedule (some had to leave early due to other commitments).  Congratulations to all selected!