As has been tradition since the mid 1980’s, the Nike Boo Williams Invitational (sponsored by the Boo Williams Summer League and presented by Nike) was held in Hampton, Virginia. The primary sites were again the Boo Williams Sportsplex and Hampton Roads Convention Center with 240 teams participating at these venues during the weekend of April 20-22, 2018. The event had sections ranging from middle school up to multiple divisions for rising seniors or younger players. Concurrent with the tournament, 32 teams participated in the first stage of Nike’s Girls EYBL (Elite Youth Basketball League), which will conclude in July. Approximately 270 colleges (mostly NCAA Division 1) from all over the USA attended one or more days of the event with many sending more than one coach to evaluate.

Below is a brief look at the action from the Marques Jackson 16U Platinum (top group of rising juniors and younger from the 32 Nike clubs) followed by a listing of the All-Tournament team with comments on the performance of each.

Both teams played with structure. North Tartan, having more firepower, came out strongly, going up 22-6 after one quarter. By halftime, the Cal Stars defense stiffened some and North Tartan shots were not falling as earlier in the contest with the lead down to 12 (32-20). The third quarter belonged to North Tartan as they scored off fast break points with nine different players tallying in this frame which saw the lead increased slightly at 54-41. North Tartan pulled away late making a game which had competitive patches appear more like a blow-out. North Tartan’s Paige Bueckers (event MVP) led all scorers with 15 points but her ability to create for others with drive and pass basketball made her contribution far greater than just scoring. While no other North Tartan player reached double digits, nine others scored in the game. All-Tournament selectee Tameiya Sadler led Cal Stars with 12 points.

This was a battle between the Iowa structured offense and DFW (out of the Dallas area) wish to play an tempo offense. Thanks to its quick shot style, DFW got up early out up 12-9. Soon thereafter, the Iowans started to get the pace slowed a bit ending up 16-15 after one stanza. The second quarter saw the tempo continue to slow. Iowa sets, resulting in made threes or scores near the rim, had its lead swell to 36-28 at half. The third quarter saw the pace continue to be fairly deliberate with both teams hitting a couple of threes and the difference remaining at eight (47-39). The fourth quarter saw several lengthy Iowa possessions scoring in the last 10 seconds of the 30-second clock possession. Slowly the lead was pushed to the final 14-point spread. Iowa was led by Kayba Laube (see below) with 17 points including five threes. Grace Larkins (see below) kicked in 14 points scoring on drives and resulting foul shots. Nevaeh Tot (see below) led DFW with 12 points including three threes.

This contest was not as competitive as the final score would indicate. North Tartan had more weapons (including the best player [Bueckers]) in the division but All Iowa had a dogged persistence never giving up. Keys to winning the game were two big runs. North Tartan started the game on a 10-1 run finishing the quarter with up 23-12. After Iowa pruned the lead to 36-28 at half, the team from Minnesota posted a 13-0 run (putting the lead at 49-28) to start the second half. Iowa again answered cutting the lead to 51-38 after three quarters. The fourth quarter saw North Tartan go cold while Iowa’s Kayba Laube banged in three threes (12 points for the game). The final margin of four was as close as the game got down the stretch. Lauren Jensen (see below) led North Tartan with 19 points including four threes. Nyamer Diaw (6-1, forward, 2020) posted 14 points for the victors but also was very strong on the glass. Grace Larkins (see below) led All Iowa with 15 points.

Questions have been asked as to how 11 players are picked out of 32 teams.

Herein we discuss the process used for Marques Jackson Division (16 and under, primarily younger [mostly rising junior] Nike club teams). With 32 teams to monitor over about 2 1/2 days, there was barely enough time with very limited staff to gather data on who should make the all-tournament team (which I was responsible for choosing). Players were picked based on performance at the event (as opposed to college potential) along with how the team succeeded at the event. Going in, the plan was to give the Platinum (first place teams from pool play) Bracket finalists two representatives each out of the eleven picked. Each Platinum semi-finalist would get one. The winner of the Gold Bracket (from second place teams from pool play; also winning two post-pool games) also would get one. The other four slots were to be given to players who played very well regardless of how her team did. As it turned out, the other four slots went to players from the other pool winners as team success seemed to outweigh individual performance. Many players from other teams did well but not in dominating fashion over the course of the three days.

Needless to say, being a committee of one, I had to rely on opinions of others following these teams to get additional input and results in the form of the score sheet (which does not always tell enough as to who was most impactful). Granted other worthy players could have been picked but given the limitations of time and personnel, hopefully the selections can be judged as credible.

Below are the All-Tournament selections for the Marques Jackson 16U Division. All will likely be recruited at some level of Division 1 if not already the case. Congratulations to all selected!! 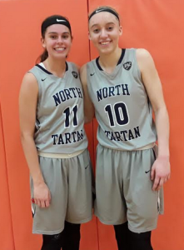 Coming in, Bueckers was the player with the most rep in the division. She did not disappoint posting strong outings game after game. It was not just scoring but also setting up teammates. While she hit outside shots, her penetrations brought repeated wows from those watching. Considered top ten nationally, she is being recruited by elite national programs.

Davis was one of the more consisted factors for the Flight. A lefty, she looked to power to the basket or score at mid-range but usually in the key. Word in the gym was that she is getting Power 5 looks.

In multiple viewings, Donovan showed a sweet perimeter stroke combined with some ability to penetrate (probably not first option). She handled well enough to fill in at point. Given height and skills, Power 5 schools should be tracking her progress.

Hagemann showed the ability to play either guard slot at the event. She had several double-digit scoring performances, but also spent significant time running the point in helping her team win its pool. Strongly built with good size, she showed both driving ability and perimeter stroke. Power 5 schools should be tracking her.

Jensen was one of North Tartan’s best players over the course of winning all six contests. Having power 5 offers, she is primarily a perimeter shooter but also has driving ability. 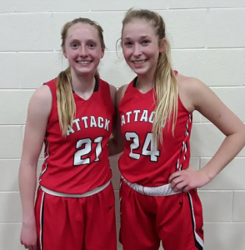 At this point in her young career, Larkins is a drive first (either hand); shoot on the perimeter scorer second. She was a regularly in double digits for her team.

Orally committed to Northern Iowa, Laube regularly posted multiple threes in Hampton. She has a very quick release off the catch. Together with Grace Larkins, they provided a consistent one-two punch in helping their team reach the Platinum Bracket final.

Quinerly may be a small guard but came up big in leading her team to victory in the Gold Bracket. She posted 32 points in helping defeat the Nike Ladygymrats Gold Jr EYBL 16U (out of Indianapolis, Indiana) in the Gold semi-final (70-57) and 10 points in the final’s win (56-40) over Kentucky Premier 16U EYBL Cann. She has good quickness and is more driver than perimeter shooter at this point in her young career.

Sadler combines a calming nature with above average athleticism. While running her team, she picked her spots well as to when to look to score. Posting multiple double-digit games, she scored primarily via the drive in leading her team to the Platinum Bracket semi-final.

Orally committed to North Carolina, Todd-Williams was one of the top 2020 (most of best generally got moved up to the EYBL) talents in the division. Lean in built, she showed the ability to play any of the perimeter positions. She has a nice mid-range stroke, will take contact going to the rim, rebounds and played respectable defense.

On a team with balanced scoring, Tot posted a couple of double digit performances in the first two rounds of the Platinum Bracket (losing in the semi-final). A bit small but decently quick, Tot hit some threes and drove some in helping her team go 4-1 in Hampton.