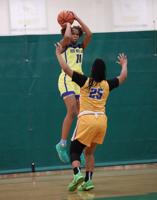 Hampton, VA was the place to be this 2022 grassroots season.  The Nike EYBL season kicked off but the Boo Williams Invitational also took place in the Hampton Convention Center.

The usual suspects were in attendance along with some new comers to the circuit. The feel of the gym  was a little different this year. The excitement wasn't the same as years past. A lot has to do with COVID and everyone just getting back to some sense of normalcy. That was a common theme from most of the college coaches that I spoke with. 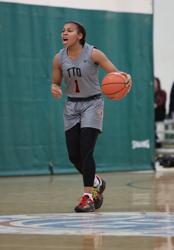 The DMV was well represented this past weekend at Boo. The  student athletes representing the DMV played for the Philly Rise, Team Durant, Team Takeover, Boo Williams and the Fairfax Stars. Whether it was the 17U or 16U bracket the DMV area left it's mark to start the recruiting season. The 16U Platinum Champion Philly Rise came to Boo with eight players with three representing the DMV.

Madisen McDaniel '24 lead the 17U bracket at 6 assist per game. with a 4:1 assist to turnover ratio.  She also, was in the top ten in steals at 2 per game. Going into the next session I would like to see her get more active on the offensive end which will open up more opportunities for her teammates.

Kennedy Umeh '24 was one of the driving factors of the 16U Platinum Champion Philly Rise. Throughout the weekend she matched up against a variety a bigs and held her own. She's mobile enough to close out and strong enough to bang with the best of them. Can she and her teammates keep that chemistry going in the 16U division? I dubbed the 16 U Platinum Division the wild west because there are a couple  of teams who could compete for the championship.

The Youth Movement was on full display.  Since I'm still getting my feet wet being back on the circuit, I spent most of my time with the 16U division to see WHO'S NXT?

There were a couple of players in each of the younger classes who really caught my attention. This is the stage where you can really tell if a kid really has the goods or the potential to be one of the most sought after kids in the country. By the time the 2025-2027 classes graduate, everyone should have used their COVID year exception. It probably won't do anything to the portal but at least kids in high school can start to receive majority of the looks again.

Zakiyah Johnson (Kentucky Premier), who has some similarities to another Sacred Heart alum in Daijia Ruffin.  Zakiyah has more of an upside then Daijia did and is a key contributor to her 17U team as a ninth grader.

Aniya Foy (CY Fair), had it going from all over the court during session 1. With all of the scoring that she did it was her defensive tenacity that stood out.

Shayla Smith (Philly Rise), was the glue for her Rise teammates during session 1. The "illadelph" native put on her hardhat and went to work. Whether guarding the other teams best player or hitting timely shots.

Aaliyah Crump (North Tartan), played the 1-4 for her team at various times of session 1.  Whenever her team needed a bucket everyone in the gym knew who was going to get the ball. She played extremely calm for someone her age.

My favorite from the 2026 class, Kelsi Andrews, plays for FBC but if these young ladies have anything to say about it, you will be talking about them for the next couple of years: