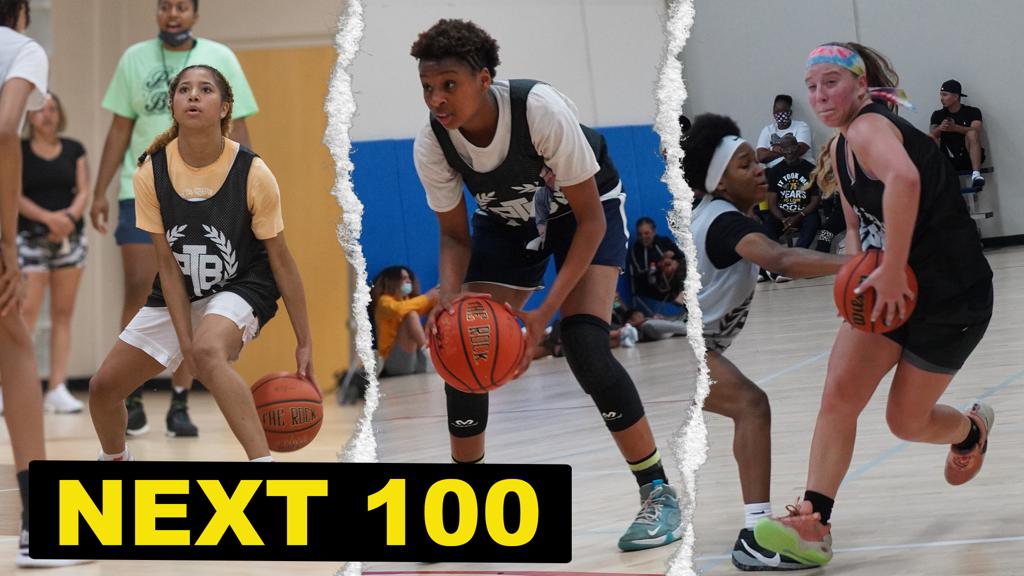 The Next 100 Killeen stop was actually an impressive group of high school talent that came throughout Central Texas. Special thanks to Ball So Hard and the City of Killeen for allowing us to put this event together for the area. Also, thanks to the staff and all the trainers who put the time and effort in to making this a success.

Esperanza Moreno-5’6 G (Belton HS) 2022 Supergirls– Her defense was definitely one of the things that stood out. Active and applies the pressure. Has a nice mid-range shot good pull-up was good during game play. Aggressive on the offensive end and can attack with either hand, taking the defender off the dribble was easy.

Diamonique Barnhart-5’3 (Copperas Cove HS) 2022 She handled the ball well under pressure, saw the floor, good court vision, and made the right pass. Can create her shot and can pull up for the jumper or attack the rim.

Anna Beamesderfer-6’1 F (Kempner) 2022 Supergirls– Has good size and versatility. She can finish in the paint and can put the ball on the floor and get to the basket. Showed a nice mid to long-range jumper, has good hands and footwork and scoring after contact. Very impressed with her game.

Taleiyah Gibbs-6’0 F (Killeen HS) 2023 AD Elite– Long and athletic will always be the base but her tenacity inside the paint for rebounds was awesome as she went after everything, but she also took defenders off the dribble as well as pull up for the jumper. Also defends and plays the passing lane. She was aggressive on both ends of the floor and has versatility in her game. Had a very good showing, was impressed with her skill set.

Elizabeth Walton-5’6 PG (The Village School) 2023 TNBA– Hustle player that gets the job done on both ends of the floor. Can attack and get to the basket, physical and aggressive player, handles the ball well. Can score off the dribble, create the mid to long-range, and will get in the paint and grab rebounds.

Alisha Nunley-5’5 G (Trinty HS) 2023 Was one of the most explosive players that weekend, she elevates on her jumper as well as attacking the rim and her acrobatic finishes coupled with very good body control, not to leave out her defense as well as playing the passing lane with the ability to get steals.

Valerie Edson-5’2 PG Pro Skills 2023– Good leadership skills, runs the point guard position well and facilitates the flow of the game. Controls the tempo, she plays within herself and made the right passes yet she also sets the defender up with a deceptive first step to take her defenders off the dribble.

Emery Espinoza-5’4 PG (East Central HS) 2024 DC Queens SA-Can shoot the ball very well from outside. Has also added a nice mid-range shot with the ability to attack and score with either hand, a growth spurt has also helped her create problems defensively. She’s active and hustles on both ends of the floor.

Ma’Leah Duvall-5’6 G (Harker Heights HS) 2024 House 4 Hoops– Long and athletic player, has a smooth game and plays the passing lanes, active on the defensive end and attacks by creating her shot and finishing with contact. She makes good decisions and defends well, good upside.

Iyanna Billups-5’1 PG (Killeen HS) 2024 Competitive Edge– Definitely showed out and balled. Showed a nice outside shot with range, crafty with the ball, can shoot off the dribble, attack from everywhere, plays with confidence. Can definitely score the ball in many ways and was fun to watch. Has a lot of potential.

Cassidy Gladney-5’4 PG (Temple HS) Supergirls– Can attack off the dribble, finishes after contact yet can also create her shot under pressure and knock down the pull-up jumper, Can stop and pop in transition and shoot off the dribble. Her defense is smothering and applies the pressure. Her game is impressive.

Grace Riggs - 5’9 G (Harker Heights HS) She’s grown taller and has gotten stronger. Has added more to her game and can knock it down from outside or pull up for the mid-range. Her shot is more consistent, can score off the dribble, get to the basket, and finish with contact. Active on the boards as well, she hustles on both ends of the floor. Played very well, a player to watch.

Chloe Montanez-5’3 PG (New Braunsfels HS) SA Lady Hoops– Has good timing on defense and stole the ball numerous times showing she had quick hands, plays the passing lane and definitely hustles after every possession. Also, played well on the offensive end and showed a mid to long-range shot and finished strongly after contact, plus has good court vision, and finds the open teammates.

Noelani Ajel-5’5 G (Steele HS) DC Queens SA– Has a real smooth game, good guard skills that can shoot the mid to long-range, with a hand in her face yet her poise under pressure stands out wherever she is. Handles the ball under pressure and makes passes on the money.

Jasmine Culpepper-5’2 G (Hendricks HS) Played well, did a good job creating her shot and knocking it down. Has good form, fluid release and was consistent but she also understood when and how to attack, she finished strongly after contact.

Aniyah Shields 5’5 Guard SA Select 2026 – Has a strong left hand was able to blow by her defender and get to the basket on numerous occasions. Her good body control, she’s athletic, and handles the ball well. Active on both ends of the floor and can rebound and defend. Can definitely hang with the older girls, impressed with her skill level. Needs to continue to work on her shot.

Kiersten Thomas-5’1 G 2024 Ellison HS– Plays within herself and understands how to score in the flow yet she also made good decisions with the ball. Has good court vision, handles the ball while being pressured and gets the ball to the open teammate. Has a lot of upside.

Sarah Brown-5’5 G 2025– Impressed with her skill set during drills with her quick release and nothing changed during games as she created her shot to score off the dribble. She could also knock down the jumper with a quick release.

Indigo Newburn -5’2 G 2025- Hines D1-Athleticism showed up on both ends as she applied pressure on defense yet the same pressure was also on offense as she attacked the basket and finished strong.

Arianna Jennings-5’8 PG 2025- Phoenix– Long and athletic will always be the base. Her upside is scary because she plays the passing lane, can handle the ball in the open floor, scores off the dribble along with a pull up jumper. Impressed with her game.

Arionna Patterson-5’10 F 2025-Louisiana United– Unlimited range right now, attacks and finishes after contact, great body control, rebounds on both ends, scores off of put-backs, blocks shots, and defends. She’s aggressive and attacks the basket, has a versatile game, has good. Handles, and has so much upside. A definite player to watch.

Ivy Powell-5’6 G 2025 -Competitive Edge– Long and athletic, watching her progression throughout the season tells me a lot about what’s coming, be ready because she attacks and finishes with either hand, along with a nice jumper as well.

Chloe Donnell-5’6 G 2025- SA Hoops Elite– Offensive machine in the making as she knows how to create her shot. She has a nice step-back and will set it off because she can drop the jumper or attack, giving her options.

Sophia Guerrero-5’6 G 2025 (Killeen HS) – Creates her shot well under pressure, can score the ball by either attacking the basket or dropping the pull-up jumper with a hand in her face. Definitely has potential heading into her freshman year.

Lyllian Walton-5’6 PG 2025 -TNBA– Has a lot of upside and continues to improve. She’s long and athletic with a solid jumper yet she also sets defenders up with ease to attack, she see’s the floor and has good court vison and handles the ball well.

Madison Borjas-5’0 PG 2025 -SA Lady Hoops- Call her clutch for numerous reasons but #sizedontmatter when you can play. She can play and attack the basket, can shoot from outside or shoot the mid-range. Her defense stood out as well as she can get steals by playing the passing lane. Plays with a lot of confidence and handles the ball under pressure very well.

Emani Gibbs-5’4 PG 2025 - SA Finest- Impressed with her game as she can create her own shot and can get to the basket. Finishes acrobatically and showed the mid to long-range shot. Has very good body control. She’s athletic and is a vocal leader, impressed seeing her talk and tell her teammates where to go and what to do. Handles the ball very well under pressure and can score. Has a lot of upside and potential heading into her freshman year.

Zoe Parker-5’5 G 2025 -Hines D1 -She’s long, athletic, can out rebound taller players was impressive. Has a quick first step which left defenders standing as she finished strong. Needs to continue to work on mid-range/outside shot.

Krysalyn Petersen-5’3 G 2025 - Drive Nation– Knows how to create her shot, handles the ball well under pressure. Can attack and get to the basket so finishing wasn’t a problem. Also has a nice mid-range shot and cans hoot off the dribble.

Janeen Lashley-Hill-5’10 F 2025 - (Union Grove HS)Texas United– Finished strongly on the inside after contact, and with her size, she’s going to be a problem because she’s long and plays aggressive on both ends of the floor. Definitely played well and had a good showing.