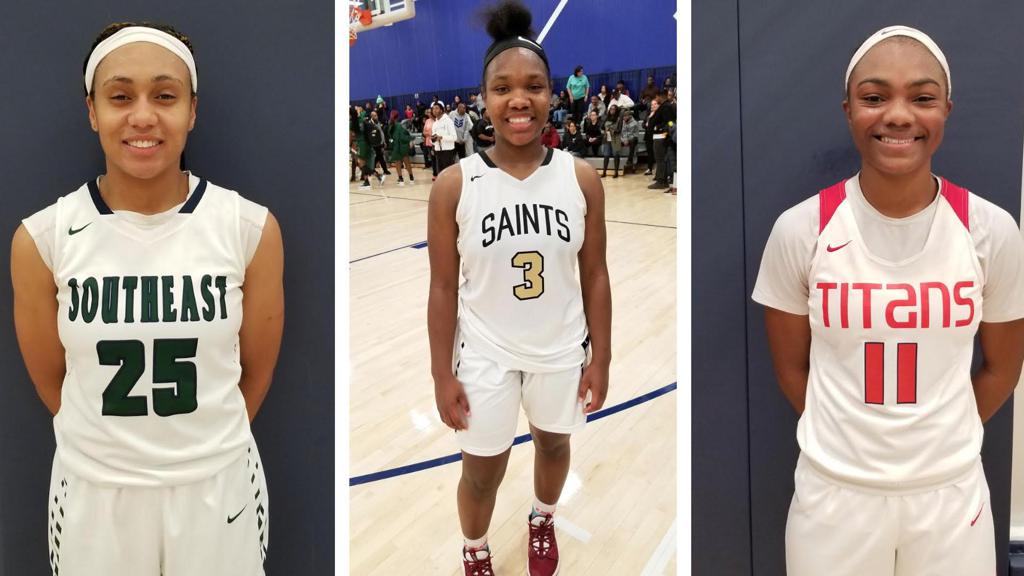 Talent shines in a dreary DMV

During the weekend of December 13-15, the DC area was mostly cold, dreary and damp but the talent was shining brightly in the beautiful St. James Sports, Wellness and Entertainment Complex (a new multi-court facility) in Springfield, Virginia (very close to Washington, DC). There were 155 coaches representing 115 colleges (some sent more than one coach) that attended one or more days of She Got Game Classic DC (11th year). This event allowed teams to play one, two or three pre-set games as they desired.

Most coaches were from NCAA D1 schools from the eastern half of the USA with a few present from the Big XII and Pac 12 conferences. In addition, at least 15 media/scouting outlets were present at the event including individuals who vote for selection of the McDonald’s All-American team. The event was like being in a large shopping mall. With over 100 teams participating, if you did not like the action on one court, it took but a few seconds to be observing another.

Teams of the tournament (alphabetically listed)

There were quite a few that could be named but these four stood out  as discussed below.

Some may say Lu Hi (as the locals refer to the school) underachieved last year with high quality talent. Perhaps this year the opposite might be true as a youthful squad defeated two quality teams (remaining undefeated) in St. Thomas Aquinas (FL) 81-73 and McDonogh School (MD) 66-52.

This has been a high quality program for years loaded with Power 5 prospects. This year’s team may have no future Power 5 players but is loaded with at least a half dozen future D1 mid-majors. The spectators of its games in this event were impressed with the superior team chemistry, superb sharing of the basketball and well choreographed movement without the ball. They play with confidence but not cockiness and the team justifiably is now ranked nationally. Here they defeated a young North Raleigh Christian (NC) team 53-22 and a talented Blair Academy (NJ) with multiple Power 5 prospects 57-37.

Southeast won both of its games at the event and probably gained a national ranking in the process. On Friday, it defeated ranked Tampa Bay Tech (FL) 57-52 by playing more cohesively and hustling more quickly to loose balls. Tech could be argued as being more talented but the big stage got to them against a team that had been on it before.

On Saturday, Southeast was not at its best playing a top level high school player in Neumann-Goretti’s (PA) Diamond Johnson (see below). Trailing most of the game and still down with four minutes left in the contest, Southeast used a combination of maximum team effort and senior leadership (see below) to turn the game around and win 62-52.

New school but same old successful program as the Coach Delaney Rudd has moved his private school operation to a new venue. As before, his squad is loaded with various levels of D1 talent and plays well together. At this event, the team posted quality wins over Bradford Christian (MA) 43-33, Bishop McNamara (MD) 37-29 and Bishop Ireton (VA) 48-41. While the team is of national top 25 prep level, some polls may not rank the team as the program re-classes (opportunity to play five years of high school ball).

Looking at some of the talent below alphabetically within graduation year with height, position and school…

Signed with George Washington, Gingras is a field general most prep teams would love to have. She handles the ball, initiates the offense (good IQ) and scores (drives, spot up on the perimeter) in the flow of the offense. She works on defense setting a good example for teammates.

Signed with LaSalle, Haynes posted two double-digit scoring performances as her team split two games at the event. Her specialty is to shoot the three (several in each game) off the catch in the wing  to baseline area. A decent athlete she can also attack the basket as a second option.

Signed with James Madison, Hazell was one of the top performers at the event leading her team to two wins. She has a high motor and rarely gives up on a play. While playing the point, she posted 34 points total in the two wins, both driving to the rim and shooting from the perimeter (including three’s).

In the loss to Southeast Raleigh, Johnson (Rutgers signee) was the proverbial one-person band posting 33 points. She shot the ball from the perimeter but also used her strong build to get to the rim.

Signed with Vanderbilt, LaChance runs her team’s offense but also does a large chunk of its scoring (three’s and drives to rim). She posted 35 points (nine three’s) in her team’s 81-73 loss to Long Island Lutheran and 16 points in her team’s 53-46 win over Germantown Academy.

Signed with Villanova, Medina is a physical inside/outside forward. She is capable of posting up or hitting a three in the course of a game. She scored 27 points in her team’s 61-58 win over the youthful but talented Sidwell Friends.

Signed with North Carolina, Poole worked hard to rebound at the event. She posted 35 points at the event, mostly in the lower key.

Signed with Maryland, Reese can dominate a game with her defensive presence altering if not blocking shots. She handles the ball well for her size and spends a fair amount of time offensively on the perimeter but does most of her scoring near the rim. She posted 22 points in the 46-43 win over Lake Highland Prep (FL). Somewhat unusual, she can shoot with either hand although currently shooting foul shots left-handed.

For shear talent, Russell (signed with South Carolina) is close to the top of the 2020 class. She can hit deep threes and explode to the rim. The downside is that at times she appears almost disinterested and does not play hard. In her team’s win over youthful Springfield Central (MA), she posted 26 points (four three’s) and nine rebounds.  If you want to be positive, call it greatness in spurts.

Originally from Quebec, Browne is strongly built but moves well and can finish with either hand near the rim. Although not option one, she can face-up on the perimeter. Word in the building is that she has Power 5 offers.

A high major prospect, Feagin scored 18 points in a 55-44 loss to nationally ranked Riverdale Baptist. She has to do a lot for her high school team including helping to bring the ball up and initiate the offense and then head into the key to try to score.

Gedeon does not shy away from physical play and uses her strong body to attack the basket. She needs to build shooting range. Word in the gym is that she currently has mid-major offers, not bad for someone who has only been playing the game for just a few years.

Godfrey was one of the stars at this event. She posted 19 points in her team’s loss to Southeast Raleigh and 25 points in her team’s 60 45 win over New Hope Academy (MD). She has improved her perimeter (particular threes) shooting, has a good basketball IQ and works hard on defense often guarding the opposition’s best perimeter player. Word in the building is that she has Power 5 offers.

Like her teammates, Perkins plays with high motor within the Paul VI system. In this game the shots (and makes) came her way. She posted 17 points with three triples included.

Teams normally go up or down from year to year and with two players off to D1, Shipley is not as strong this year. As the only remaining D1 prospect on the team, Redmond has to do a lot more than last year ranging from bringing the ball up to initiating the offense and as possible, leading her team in scoring. She has a mid range stroke but looks first of to attack the basket. In a 63-32 loss to National Christian Academy (MD), Redmond scored 22 of her team’s points. Word in the gym was that she has no D1 offers. Not saying Power 5 but some D1 program needs to step up to the plate here. 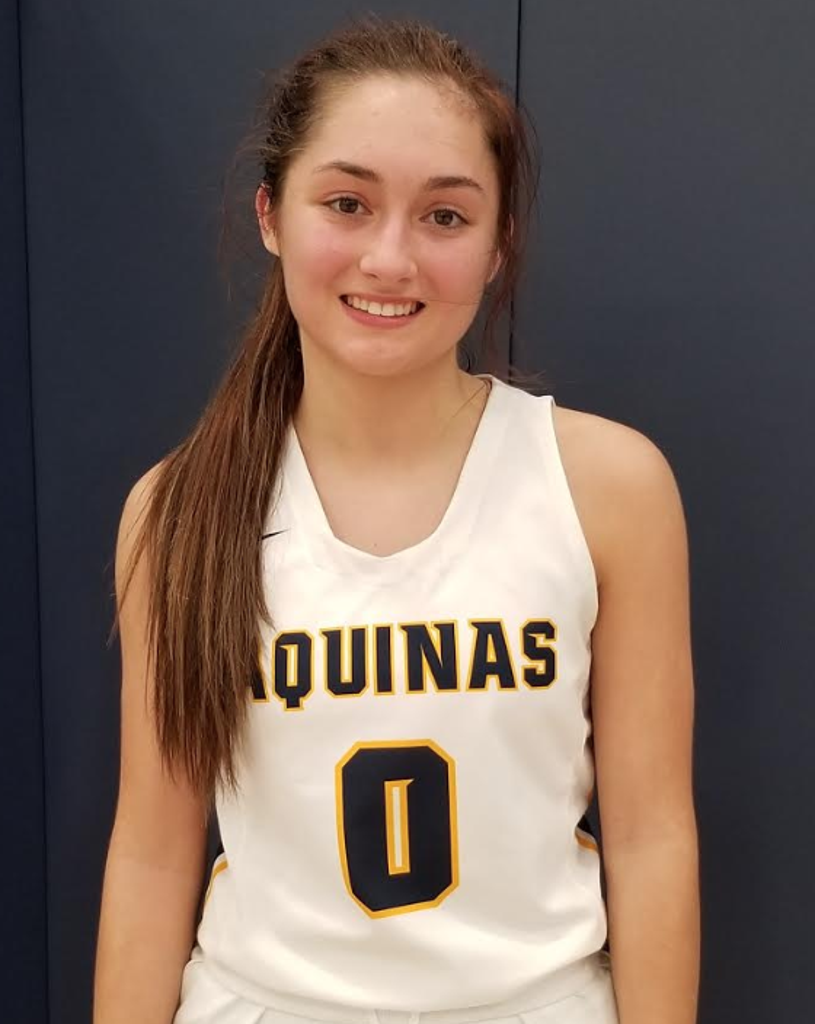 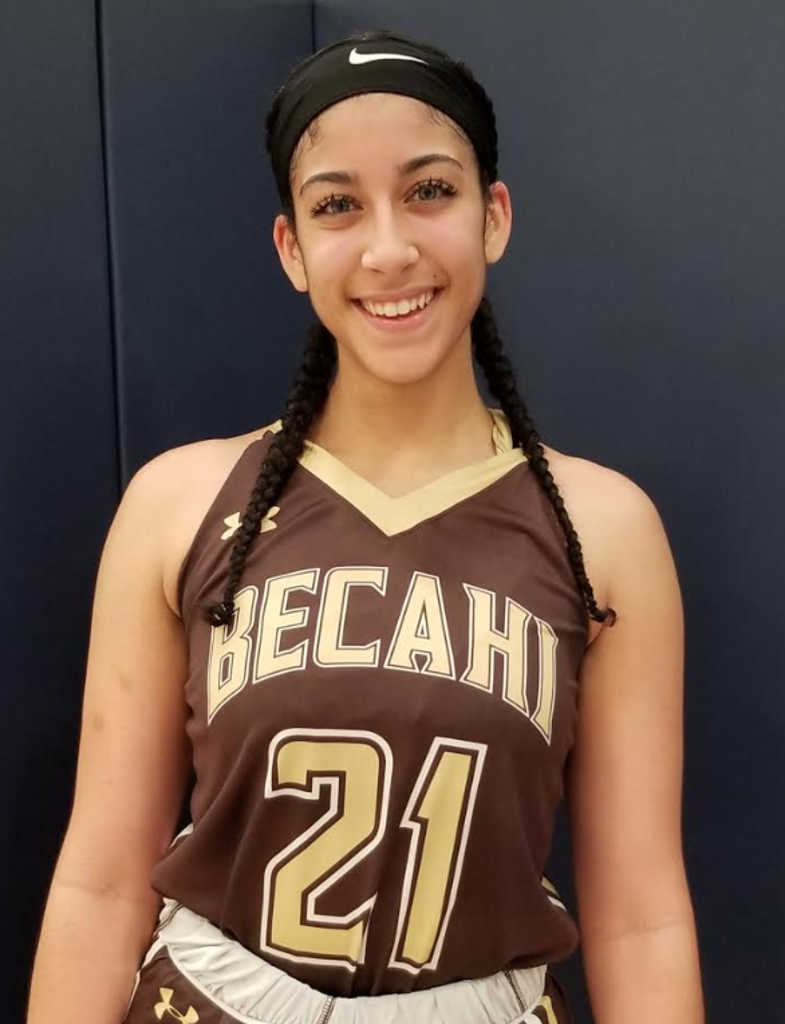 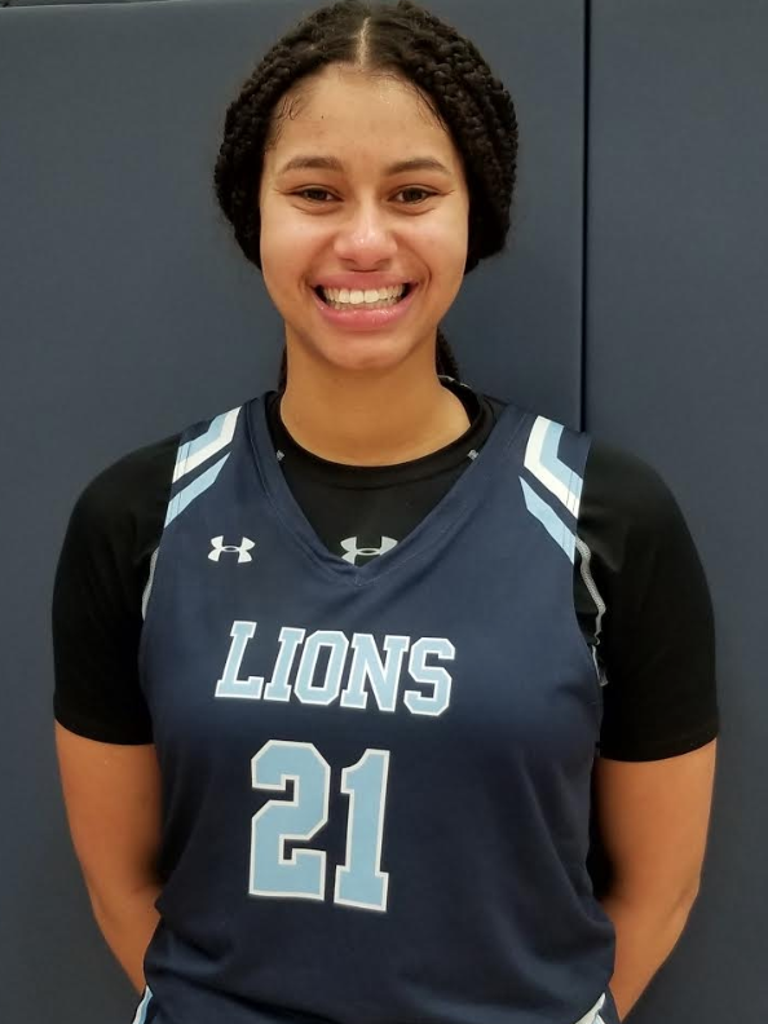 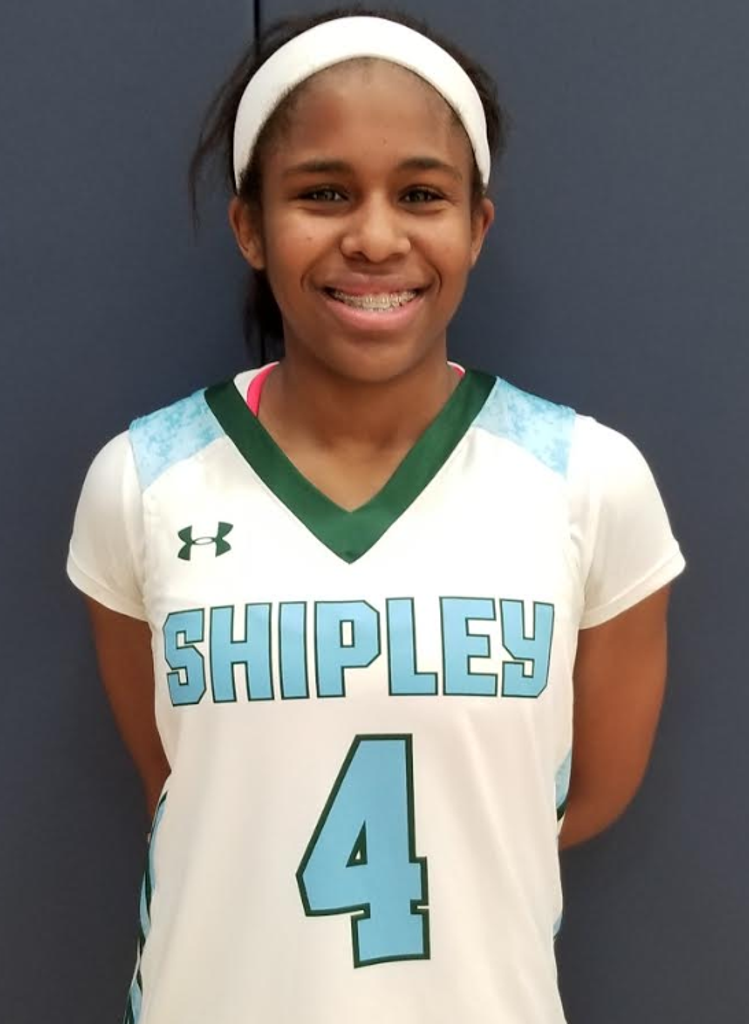 Tynes is your prototypical D1 low post. She has strong body, good hands and is adequately mobile, scoring near the rim. Her play helped contribute to a 66-57 win over Jordan High School (NC).

Allen jumps out at observers pretty quickly. She runs well with a medium-solid build. She has a nice stroke from the perimeter but also is willing to go inside to score the ball. Power 5 programs are already lining up.

Considered one of the very top recruits in the 2022 class, Barker showed strong rebounding, shot blocking and scoring both in and out of the key. Her passing seems to have improved as she made several  “prime time” dishes. However, she still settles for too many outside shots (hitting some) when she could be dominant in the key if only she would spend more time there.

Due to injuries and graduations, Clark, a Power 5 prospect, is being asked to do more for her team this season. Last year, she showed she could score the ball from the wing. Now she is helping more with ball handling and initiating the offense.

Pryor is small but makes up for it with speed, quickness, good motor  and basketball IQ. She looks to drive to the rim or dish off along the way. Only lack of height (and relatively thin frame) may keep her out of the Power 5 level.

Considered a high level Power 5 prospect, Rice combines above average athleticism with skill and basketball IQ. She looks to penetrate to score and is dangerous starting or finishing on the fast break. Still, she could improve by building more consistent perimeter shooting range.

Smikel is deadly shooting the three off the catch in the wing to baseline area. She posted 35 points (seven triples) in her team’s win over St. Thomas Aquinas (FL). 2023 (these players showed flashes of their futures but were not primetime stars)

Bahati’s game is just developing but that did not deter scouts from writing her name down. With trim build and above average athleticism, she moves well.

Bennett moves well and shows good hands. She appears to have potential to play further from the basket but currently her game is near the rim.

Grant showed division 1 potential with a nice perimeter stroke combined with adequate mobility for her size. She needs to get stronger.

Hartman moves well and has a nice perimeter stroke. Her passing/court vision seemed above average, particularly for such a young player. Strength needs to be added.

Jordon will quickly catch the eye of the basketball scout. She is lean in build with bouncy feet. She seems to have a feel for the game and ok stroke but like most her age needs to fill out and get stronger. 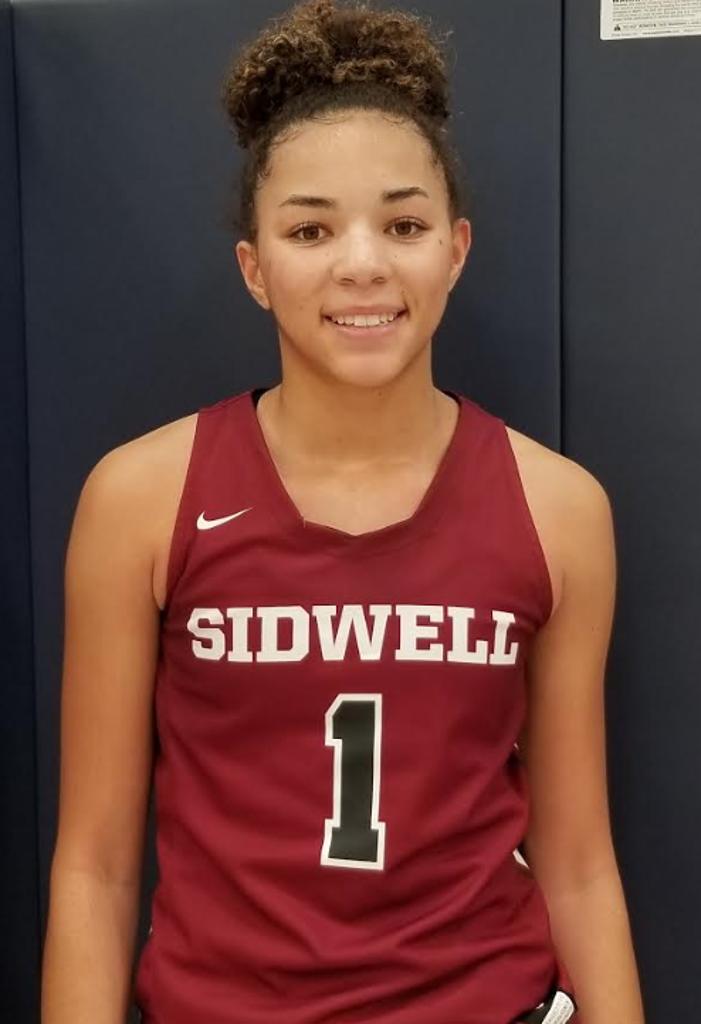