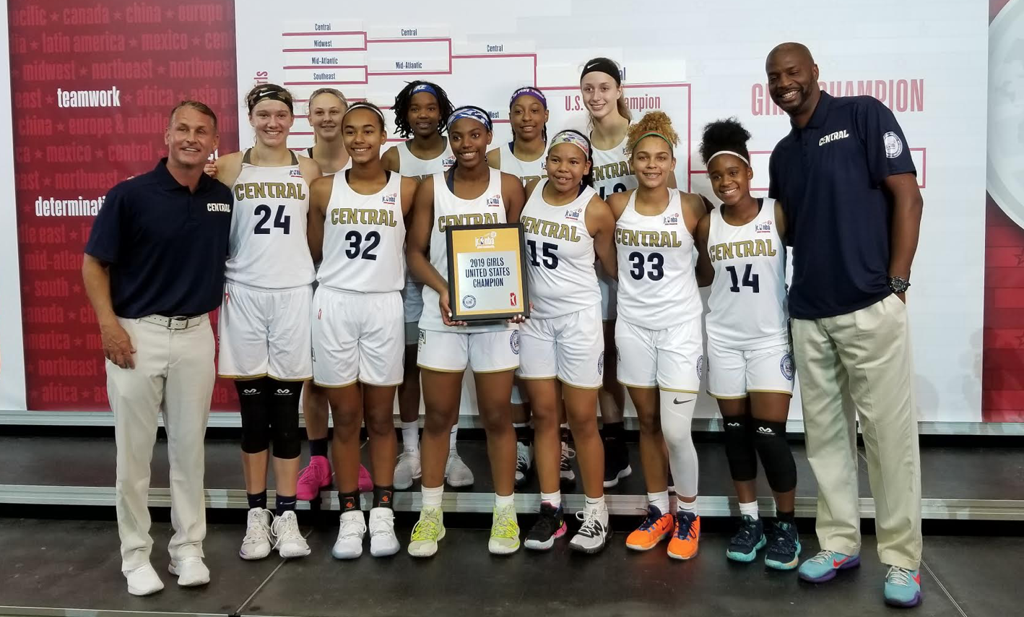 Central repeats as the NBA scores an even bigger win

Held at Disney World near Orlando, Florida, with play August 6-11, 2019, the Jr. NBA Global Championship (in its second year) saw 16 boys teams and 16 girls teams do battle in pool and then bracket play concluding with a series of friendship games (for eliminated teams). The boys championship was won by U.S. West (players mostly from Southern California) by a score of 70-61 over a team representing Africa (six different countries represented on roster). The girls championship was won U.S. Central (mostly out of Missouri and Kansas) by a score of 72-35 over a team representing Canada (from Ontario). The girls from U.S. Central (all but one player new to the event) also won the overall title last year.

Why this was a win for the NBA?

The NBA is looking to grow the game world-wide with hopes of someday having franchises located in places like China and India (and obviously Europe) and tapping into the raw athletic talent of Africa. The league believes aiding in developing youth basketball globally is a step in that direction. Fortunately, the NBA does care about the women’s side of the sport and the girls received totally equal treatment at this event. If nothing else, the very strong showing from the boys team from Africa sent the NBA brass home very happy thinking its global initiative is making progress.

Progress slow on the girls’ side

While the NBA is first and foremost about the men, the leadership does want to see the girls’ game grow. Unfortunately, there was not too much to cheer about as to narrowing the competitive balance in this area. All eight games played between U.S. squads and foreign teams were won by the U.S. One had a final margin under 10 points with the rest over 20 including some running clocks (margins of 30+). At least six (perhaps not Mexico and India) international teams had at least one player who would be recruited at the NCAA Division 1 level (some even potentially Power 5) if interested in coming to the USA for college ball. Unfortunately, the upside appears to lie primarily with wings and even more so with posts amongst these teams. Guard play (so critical in basketball and even more so at the young ages) was most lacking amongst the foreign teams compared to the U.S. squads.

How the event was run (same for boys not discussed here)

The eight foreign and eight U.S. teams were placed in pools of four squads (foreign and U.S. totally separate) yielding three pool games (Tuesday and Wednesday). After a break day (Thursday), bracket play took place on Friday and Saturday crowning U.S and International champions Saturday afternoon. Sunday, the International and U.S. champions met to crown an overall winner. Also, on Saturday and Sunday, there were single crossover games between the International and U.S. sides. Thus, all teams played a minimum of five games and maximum of seven, if a team reached an overall final or third place game.

Players cannot turn 15 until September 1, 2019. Also, the Canadians decided to adhere to a January 1, 2020, cutoff so their teams were a bit younger putting them at a slightly increased competitive disadvantage. In referring to players, age is everything internationally except in the USA (and to some extent Canada), where graduation year is a big key in determining a prospect’s potential.

Initially, media and scouting services were frustrated by programs with only names, position and hometown (USA) and single country (including Latin America) teams. For the Africa, Asia Pacific and Europe/Middle East teams, just a country was listed. Useful information of height and graduation year was nowhere to be found let alone team coach/administrator contact information. Also, early in the week, media was told the printed box scores (see online boxes was supposed to be the policy) were only for the teams. Due to coordination issues with FOX (televising network), schedules were only released to the public a few hours before play commenced on Saturday and Sunday. Later in the week, printed halftime and full game boxes were more readily available to media and scouting services. In speaking to a NBA staff member, there is a high likelihood that the above issues will be resolved for next year. The NBA wants this event to be the best of its kind and the correcting the above issues will help make it so.

Looking briefly at the U.S. and International finals plus the overall final...

Both teams were very talented with multiple Power 5 prospects (several discussed below). The score at halftime had Central leading 36-33. The game was decided in the second half (mostly quarter 3) by a 23-0 Central differential in points off turnovers putting Central up 57-48 after three quarters. The lead was not threatened in the final  stanza. Central put four players into double figures led by Jada Williams (see below) with 16 points and Chloe Clardy (see below) with 15 points. West was led by Judea Watkins (see below) with 23 points and Breya Cunningham (see below) with 19 points and game leading 13 rebounds. No other West player scored more than eight points. 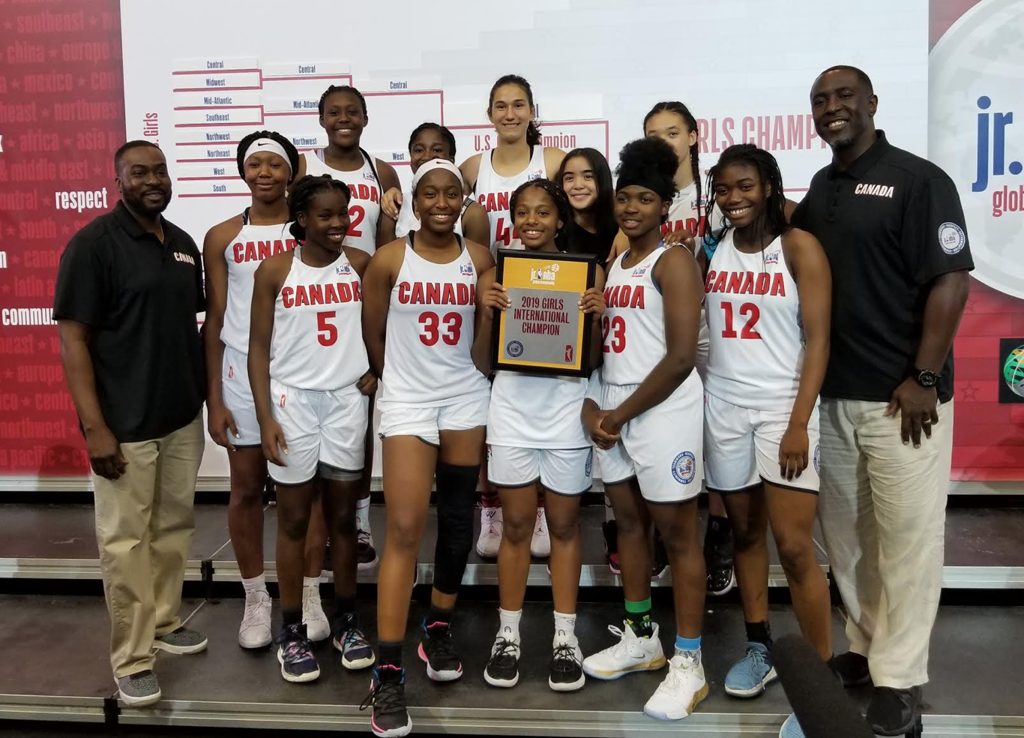 These teams were similar in that both had post players with Division 1 potential but its scoring at the event was more than not guard oriented. The difference in this game was the Canadian guards were far quicker/faster and used those advantages to force turnovers (31 to only 15 for Canada) and collect 24 points to 12 off those errors. Canada led 31-22 at half. Matters slowed down in quarter three and the Latin American team closed the lead to 45-40 after three quarters. In the final stanza, it was as if the Canadians took energy pills and the lead grew to the final margin. Canada was led by Caidence Amartey (5-6, shooting guard) with 13 points. Latin America was led by Dagmar Hentschel (5-8, shooting guard, Argentina) with 15 points.

This was not expected to be close and in the end it wasn’t. However, the Canadian quickness bothered Central’s guards in the first quarter with the far more skilled Central only up 16-12. The game was essentially decided by a 16-3 Central run to start the second quarter. Eleven Canadian turnovers in the quarter contributed greatly to what became 34-15 Central lead at half. The third quarter was even with a big fourth (23-5 scoring edge for Central) quarter for the Americans, who down the stretch got more comfortable while the Canadians got more frustrated. Central was led by Kiara Smith (5-7, shooting guard, 2023) with 15 points followed by five players with eight or more points. Canada was led by Tene Smith (5-5, point guard) and Jada Bediako (see below) with 10 points each.

Taking a brief look at some of the players who impressed in one or more games emphasizing upside (for a change). Just about all the listed US players have a Power 5 upside with the international players having at least a Division 1 upside not that they will ever play for a US college.

Players are listed alphabetically (USA separate from international) with height (best guess), position, graduation year or age as of August 31 (foreign players), team, with country and where possible home town in parenthesis.

Cunningham was our favorite low post player. She played with a good motor, embraced contact, finished with either hand around the basket, blocked shots and was a tireless rebounder game after game.

Donovan got hurt in bracket play and her absence contributed to her team’s elimination from title contention. She is an athlete amongst athletes but needs to add shooting range to maintain her lofty status in the years ahead. Getting to the rim is almost too easy for her.

Dudley is a coach’s daughter and her intelligent and athletic play reflects that. She can play inside or out, primarily looking to attack the rim but has perimeter stroke. She is on course to being one of the top 2024’s in the USA. 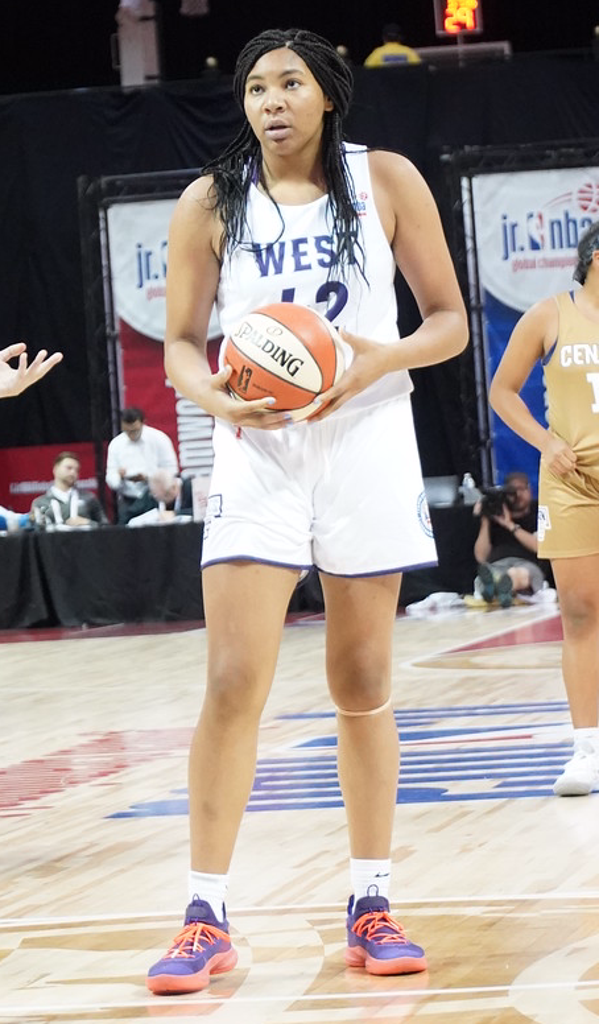 Kelly combines athleticism with stroke, handles and penetrating ability. Her play kept her shorthanded squad in the hunt longer than might have been expected.

Maul is athletic and plays with a good motor. She appeared to want to get to the rim as scoring option one.

Nichols was Central’s only returnee from last year’s title team. She play hard and likes to post up but will also shoot from the perimeter. You could almost call her a 2/4 rather than a small forward as she is not a baseliner.

With her squad short on size, Ogden, normally more of a baseliner, played a lot more inside and was productive doing so. Reported to be strong academically, high academic institutions should be monitoring her development. 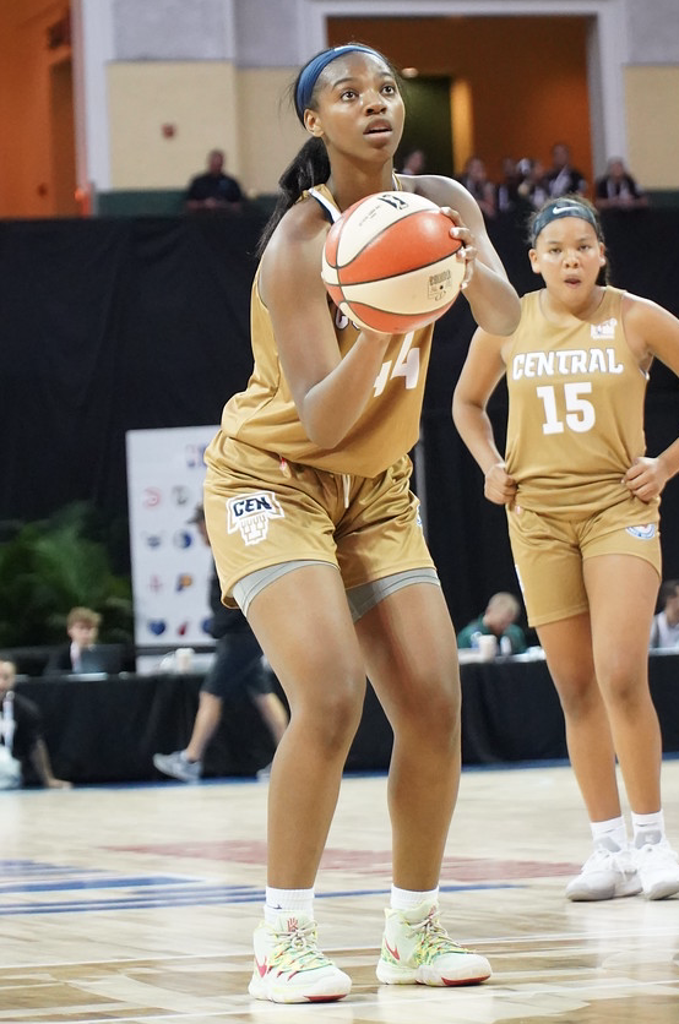 Samuels is a bit small but quick with good handles and basketball IQ. She has a decent stroke from beyond the arc.

Sheppard is a Power 5 level athlete with ability to get to rim and has a respectable perimeter stroke.

Watkins is one of the top prospects in the 2023 class. With great size and athleticism, she likes to attack going right. Her outside shooting is a weapon but still needs to become more consistent. She should not force up perimeter shots that are not in the flow of the offense.

Williams was the straw that stirred the drink for Central. She scored when needed but number one kept the offensive flowing. 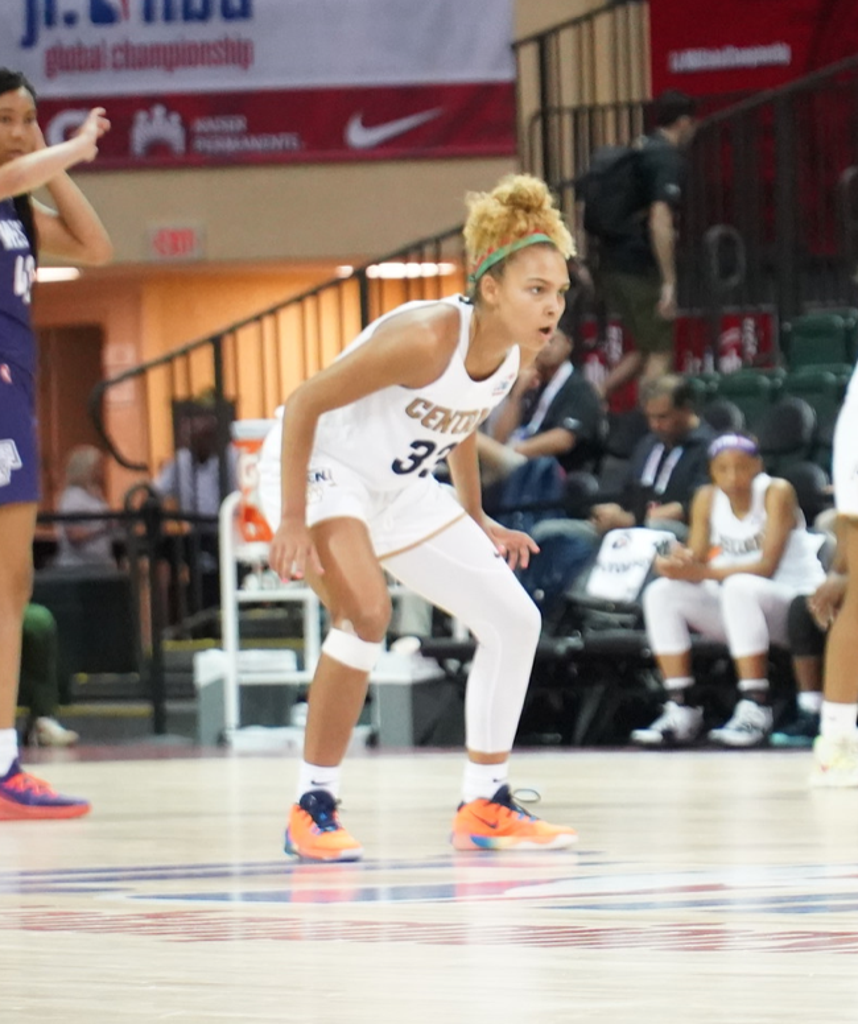 Fairly solid in build, Da Silva has good hands but needs to be more active more of the time. Skills are still developing.

Ehab was one of the younger players too impress. She has handles, face-up stroke and passing ability. With adequate foot-speed but average quickness, at times she needs to protect the ball better. This is one player whose progress should be monitored from Power 5 level down (assuming she interested in playing US college ball).

Her team had its issues but Lemmila had some impressive moments. For her size, she has decent ball skills, some face-up stroke and “ups” to rebound and block shots. Like so many, this Power 5 level prospect needs to get stronger.

Nenadic is a face-up forward with size and nice perimeter stroke. She needs to add more game in the paint given her height and fairly solid build. 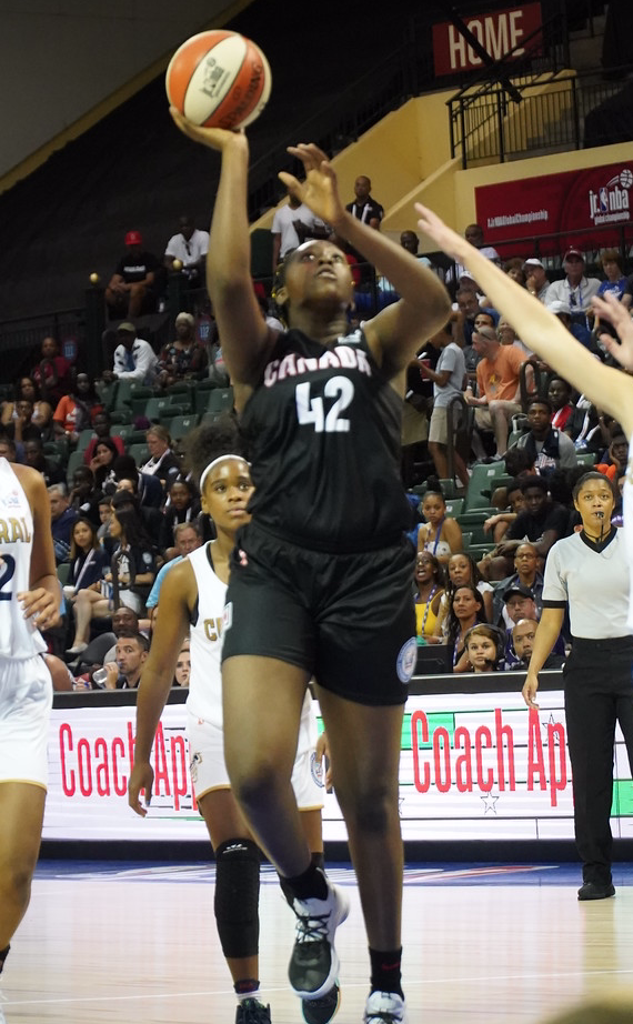 Fairly strong in build but with average foot, SIrtautaite showed an ability to attack the basket from the high post.

Taulelei is light on her feet but needs to get stronger. She showed a nice perimeter stroke off the catch.

With great size and strong, mobile frame, Vasconcelos has a high ceiling. She moves well, has good hands but skills with ball are not there year. Power 5 programs should be monitoring her progress.

Yang had the best looking pull-up jumper (with a bit of flair thrown in) at the event. She moves well but needs to be more consistent in making her she shots. 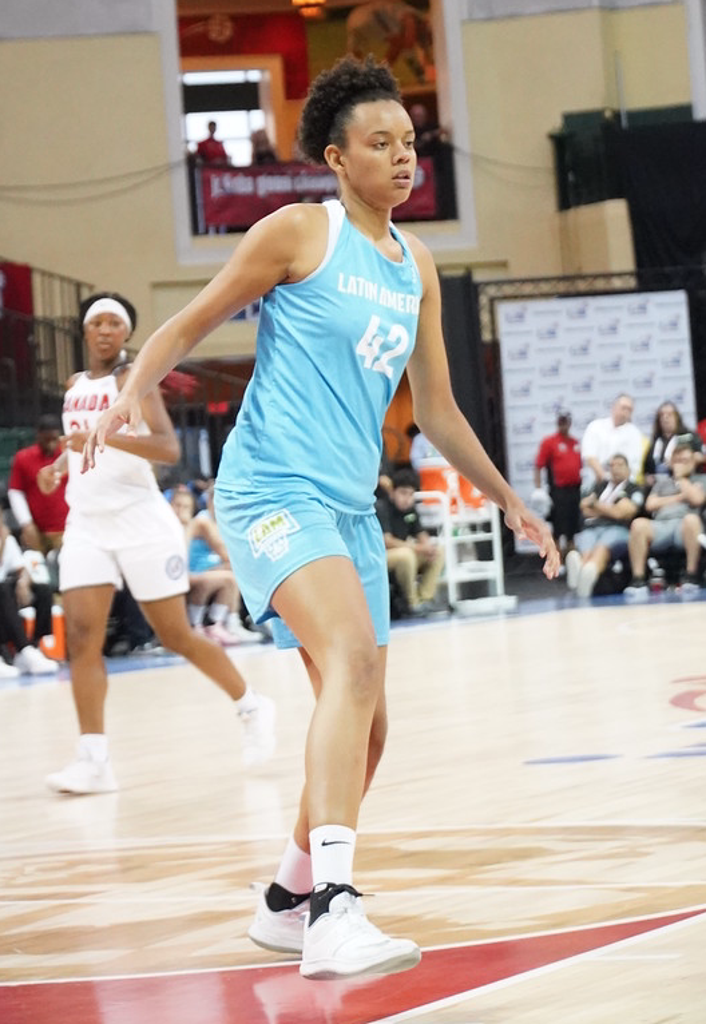