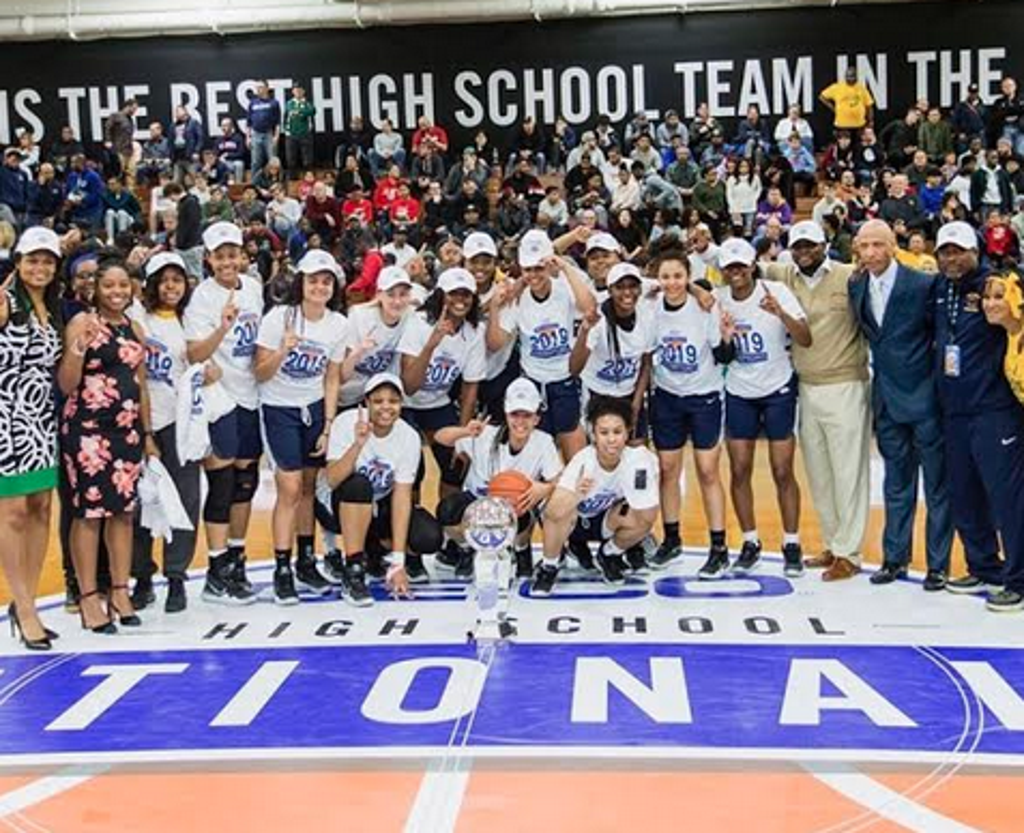 With other commitments taking time, only one final Pass Tha Ball Prep Polls in Review is being done for the 2018-2019 season. After many twists and turns that saw several different teams resting temporarily at top of US high school girls basketball rankings, New Hope Academy (Landover Hills, Maryland) emerged from the pack to take top billing after winning the season ending Geico Nationals in New York City in early April.

How New Hope rose to the top

As luck would have it, three (Miami Country Day, St. John’s and Centennial) of the very top teams from this year’s polls were willing and able (only about seven states are currently allowed to participate by their respective state governing boards) to play in the Geico Nationals in New York City in early April. Although further down in several of the polls, New Hope Academy was the next team able to play. In keeping with the theme of the College Football Playoffs, once in, winning this event (with its best field ever) would jump a team to first. By beating the pre-tournament #1 and #2, New Hope did just that finishing unanimously #1 in spite of having three losses on its record going Into Geico Nationals.

Who was more deserving of #1? New Hope or Columbus Africentric

Given Geico results, the polls really had only two choices, the Geico champions New Hope or undefeated Africentric (very highly ranked before Geico). Other candidates for #1 either did not have a strong enough resume (even if undefeated) or were knocked out by a Geico loss on the court.

New Hope is a private school which took advantage of playing a national schedule. They played 10 teams that were nationally ranked at some point in at least one top-25 poll over the course of the season and four more that were Final Four teams or State Champs in various states. The team traveled to Alabama, Arizona, New Jersey, New York, Tennessee and Texas to play strong opposition in those states. Of its three early season losses, it avenged two (Miami Country Day and Bishop McNamara) on the court. Previous to the Geico, New Hope won the national NACA Championship (Christian schools) and Bishop Walsh (strong but unofficial private school championship in Maryland).

Undefeated Africentric, a public school, was limited by number of open dates (only eight beyond its league (relatively weak) commitments in Columbus, Ohio,) and Ohio’s allowing only one trip to play beyond states bordering Ohio. Another drawback out of its control was the requirement to play in the smaller and a weaker OHSAA Division 3 playoffs rather than the powerful (for this year) Division 1 (largest schools) playoffs. To Africentric’s credit, during the season they defeated ranked Edison (Michigan’s best team) and Mount Notre Dame (Ohio Division 1 champions also ranked below) plus beat a quality small school champion (Schlarman) from Illinois.

Both New Hope and Africentric were loaded with future Power 5 players and a game between them would have been special. In the end, Africentric’s (MaxPreps Computer ranking of #63) strength of schedule was just 11.9 versus 28.0 for New Hope (MaxPreps Computer Ranking of #10). That, combined with New Hope winning the Geico, pushed them to a unanimous #1 in just New Hope Academy’s second year as a program. Congratulations to both schools on fine seasons!

Quite a few coaches would gladly have stayed home rather than risk a well-earned number one ranking. Not Miami Country Day’s Coach Ochiel Swaby! His program annually seeks out the best opposition possible turning down no challenges. A smaller school (class 4A out of Florida’s nine), during the season a few years back, they defeated the teams that won the five larger classes above 4A in addition to winning the 4A crown. Without hesitation they willingly put the #1 ranking on the line in New York City. If the opportunity arises in the future, they will do so again.

There is not a lot of history honored in this game. Long term success without being named #1 is often overlooked. In checking, St. John’s College High School’s run starting in 2010-2011 has been truly amazing and deserves to be noted. Coach Jonathan Scribner was kind enough to outline his team’s accomplishments
over those years.

What is below is from Coach Scribner.

“Thanks for the fine words and for recognizing what we've accomplished over the past few years. For me, it actually goes back to 2011 as we had a dip in 2014 and 2015. I will try to recap as best I can.

2011 finished 33-2 and #5 in the USA Today. I don’t remember what the other polls had us at or if MaxPreps or ESPN or Blue Star were even ranking back then. We won WCAC [editor’s note: DC area Catholic League, almost annually one of the strongest in the USA] and DC city titles.

So overall five seasons in last eight, St. John’s posted a top 5 national finish. Three straight years the finish was with either #2 or #3. Agreed that while we have not secured that #1 spot in any single poll, I don’t think any other program can claim the consistently high level of performance, especially if you go back to our first high ranking team in 2011. (Btw, I still say the very best team I ever had was my 2010 team until our dominating center tore her ACL in early January, but that’s another story). Interestingly, as great a year as this was, especially with all the national accolades and Geico appearance, in the end our 2017 year had a better overall finish. And that was before Azzi arrived!”

An approach which has been used in football is the basis for what is done here. The four national polls (links below) were reviewed and 25 points assigned to the team ranked first down to one point for a team ranked 25th. Then the points were added up (maximum score 100) to create the ranking order. There are over 18,000 high schools ranked by the MaxPreps Computer. Finishing in the top 25 of any one poll is an honor. Finishing there in the aggregate of the four below is even a greater accomplishment!!

ESPN refers to its poll as "Power Rankings". It is the most forgiving of losses, looking at what would be expected of teams if they met in the future (who's better in a theoretical future meeting which may never occur).

Teams with location are listed according to total number of points garnered 25 for first down to one for 25th place. Where there are ties, teams are listed alphabetically. Again, for more details on each team, see the four polls individually.